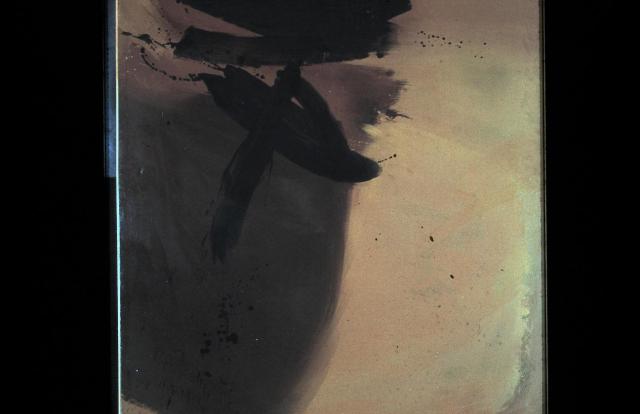 
The first year at Leeds was wonderful, one of the best years of my early life. For once I was left alone to develop whatever seemed interesting to me. I was a fully responsible adult human being, responsible chiefly to myself. I was also in love and hitchhiking to Norwich two weekends out of three which left only four days in the studio - but those days were so full of activity I turned out to be one of the most productive students in the place.

All the materials were free and almost unlimited since each student had a quota that could be traded off, a trade-off that could be arranged through the storeman. So I had as much hardboard, emulsion, and oil paint as I wanted. I soon decided against canvas. I didn't like the way it gave and absorbed. I didn't want colour to sink in, so it was easier to take a 4x4ft piece of hardboard, prepare it with white emulsion, then to get the oil colour on.

I loved the colour. I loved it in tubes, coming out of tubes, sitting on a plate that served as my palette and the way it squiggled along the surface, not building up in glazes, but as fresh as it looked in the tube, as opaque and alive and itself. I would begin by painting the whole surface a strong colour then work into it, drawing slowly, crudely but tentatively across the surface. Often it would begin as a railway line, then a central motif would arise - a figure, a vase, a line of washing - to which more colour would be applied and so the whole would build not as varieties of the same colour but as one sitting on top of another like a wholly new colour, like something improvised, luminous, faintly intoxicated by itself and the general sense of well-being. Oil paint remains wet for days, of course, so the way was to work on a number of paintings at once: as one was drying the next was ready for a fresh coat.

It was naive but the tutors liked it. It must have struck them as fresh, and to be honest it struck me as fresh too. It wasn't much like any other painting - a touch Chagall perhaps. The images weren't laden with heavy meaning. They were at the edge of meaning, airy, luscious shapes that suggested other things. Vase suggested light suggested garden suggested bodies, etc. Matisse meets Chagall. Just nowhere near as good, merely possibility.

Two or three of the tutors took a particular interest in me and would come round and talk. I can't remember the conversations but they seemed to be substantial, exciting - confidential in a way, and entirely encouraging. It was flattering that artists should want to talk to me and find me worth talking to. Perhaps they found my own enthusiasm refreshing. There were, as I have said, very few painters and I was probably the most exuberant and least career minded. I was enjoying what I was doing: nothing else seemed to matter. One could make an appointment or simply try knocking on the Principal, Willy Tirr's door and he would invite one in if he wasn't busy and talk about anything that seemed interesting.

I haven't yet mentioned the other parts of course, the supposedly compulsory Art History (that I never attended because I continued painting in the studio) and the Complementary Studies that offered a choice of Film, Anthropology, Music, Sociology, Psychology and, luckily for me, Poetry. More on that in another post.

Was this an 'art education'? It seemed to me something better than that at the time: it was an understanding of what art could be. Did it help me technically? Hardly. It's quite possible my paint quality could have been better, but I wasn't concerned with 'professionalism' at that time. I had no interest in it. I just wanted to carry painting with this lovely material, and to write poems.

You might argue that this was a fool's paradise, the last kick of hippiedom, and it might have been so, but it was also extraordinarily heady and liberating. The company of artists was the key factor: their interest, their acceptance of me, their knowledge, not so much of techniques, but of art and literature and the world.

I suspect all my best paintings were done in the first year of the course. The picture on the wall of the next room was done then. It will be worth thinking about what followed.

Never realised you did art. Now that's the purpose of a university ediucation, an enlightened, guided freedom. And in the days when one could still hitch-hike.

I read a pamphlet once about the heady days of Leeds College of Art (I don't know if that's where you were), and their legendary interviews. Reviewing one applicant's portfolio, they asked him "Are you precious about your art?" On receiving the answer "No", they threw al his drawings out of the window.

I beg your pardon - you say more about it further down the page. The reverse chronology of blogging catches me out sometimes!

As I say, it was a marvellous time as I remember it. Both the paintings and the poems seemed to be becoming part of an independent and welcoming world.

I love your Leeds story. It seems entirely feasible.