Malaysia 13: One last journey and a goodbye 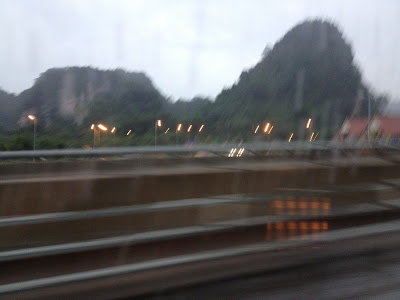 Light leaping and fading past mountains and highways.

After a long journey we arrived home at about 9pm last night, unpacked, ate a little though feeling no great hunger, opened the post, wrote a little on FB, extended the travelling life of Uncle Zoltán, then showered and went to bed, managing only a few pages of reading.

How strange returns are. Away from home is a heady experience, the suspension of a normal-home-self composed of routines that have become almost mechanical, and the immersion of the self in an alternative world that extends and renews it. This visit more so, in fact to an extraordinary degree.

The last full day included a visit to Ipoh, the place where Eddin's father lived and went to school. We took a slightly roundabout route off the main roads so we could pass through Tapah, where his mother once lived.


The house was deserted now but we went in. It was a wooden house set on stilts with the kitchen beneath and three rooms above all bare. There was a small garden with an outside thunderbox. The house next door, attached to it, was also empty. It was baking outside. The town was small and simple: the same open shops, a school, a church, a place where the trains once ran.

We moved off down more side roads towards the Cameron Highlands. Here the houses resembled the Malaya Clarissa once knew. This is my Malaya, she exclaimed. You should never have left, the others answered, smiling. Small houses line the road at intervals, some part of small settlements. The road rises past a Gurkha camp. The road runs through jungle, past old rubber plantations and deserted tin-mines, their deep quarries filled with water.

After a while we turned round and continued on the road to Ipoh, stopping at Kampar for drinks and to buy some 'chicken biscuits'. We arrived in Ipoh (see pics here), which is set in a valley, and parked in the main square. Ipoh is unlike other places we visited. It has a great central square where boys were playing football. The school on one side was where Edin's father went, a grand classical facade with the typical local/colonial touch that makes up the late Empire style of architecture. Everything was sparkling clean. Walking round the square you see the law courts and the city hall. Behind, there is another square with the Birch Memorial clock tower, a thoroughly imperial affair with panels representing various thinkers, gods, scientists, artists, and administrators. The city centre is fully aware of its municipal status. It is grand, like a miniature version of New Delhi. Its version of history is orderly and clear to see.

We walked around and, as it grew dark, stopped for an outside meal at a busy junction full of eateries.  There was a light breeze, the tables were packed.

The long drive back in the night. The hotel quiet, the lobby almost empty.

Travel broadens the mind it is said, and that is true, but some travel deepens the soul too. It does so by revealing other ways of being human, other ways of living, offering parallels never fully considered, not as a form of the picturesque but as a partly-comprehensible experience. Everything grows in dimension. Those who invited and accompanied us were both of the place and beyond it. Their histories were embedded in the region but their minds and travel and reading had taken them out of it and back again.

Literary conferences and festivals can be marvellous for meeting great writers and making friends, but their necessary formality renders them slightly dreamlike, no sooner started than ended, the whole illuminated by a few conversations, a few readings: a remark here, a voice or face there, sometimes, with luck, a sense of recognition on meeting on a fellow spirit. The eye brightens, the face relaxes: we are drawn in and we laugh more often.

This visit encompassed two literary occasions but was essentially a journey through friendship in a landscape brought alive by those friendships. The texture of life, so often glimpsed at skin level and preserved in one or two fortunate photographs, deepened to an understanding of the emotional and political web in which lives are led. There was good nature everywhere, a certain carelessness about daily ritual, but there was also the intensity of living under pressure, of the joys and uncertainties of living at this particular angle to history.

I think we were in the presence of genius with our hosts. It was flattering - a great honour - to be so honoured by them. Their passionate high seriousness was at all times leavened with humour and humanity. It was, in some ways, life at high voltage, but with fun and sympathetic intelligence. There was no pride, no reserve, no meanness of spirit. It was as if everything were continually opening out. For Clarissa it was a taste of her own life at an early age. For me it was confirmation of the best to be found anywhere, including England and Hungary, but rooted in the specific, in poetry, history and what we can properly call the individual soul.

So I begin and end the last part of this last Malaysian blogpost with the sense of soul, by which I mean the consciousness of being in a world of meanings and sympathies. Thank you Eddin, Pauline, Alvin, Karl and Iqa. We will not forget your kindness and great souls. We will carry you with us. Your histories, your people, your localities, your specifics, and all the evidence of lives to which you introduced us, remain with us. 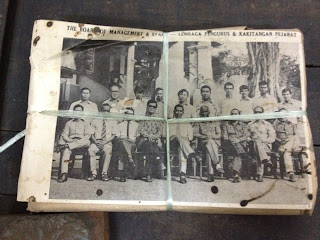 from the Royal Press in Malacca,  small bundle