Malaysia Postscript
Notes on a few photographs 3: In Malacca 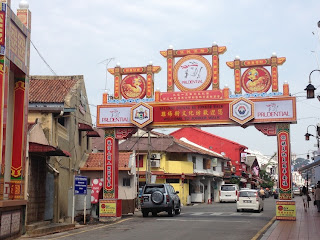 Almost the first view of Malacca on foot: the old heritage district.  Nice that despite its heritage status it remains relaxed, a touch louche, not utterly finished-and-giftwrapped for the tourist. This entrance to the street tells you much. There is the traditional Chinese-style gate topped with advertisements for Prudential. There are the bright colours - that yellow, that red - the cars and the street furniture.  It is all very different from KL. The part of town is quiet, bohemian, friendly, between two worlds. In the photo below, a little way down the same street there is the air-conditioning fan hung big and any-old-how on the bright wall, the shack-like ambience of the upper floor, the red plastic stool in the street, the big plastic foot sign for reflexology, and that faintly Dutch-looking gesture at a bell gable on the red building. The notices and advertising signs are of the same general disposability as the metal tables and chairs of the eateries anywhere in the country. There is nothing poncified here but old Malacca is a bubble inside a bigger commercial city, a once vital port. 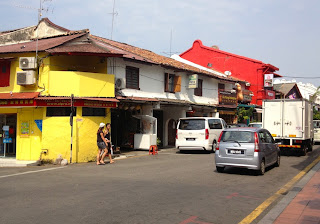 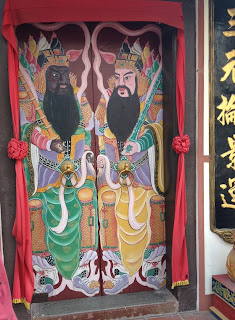 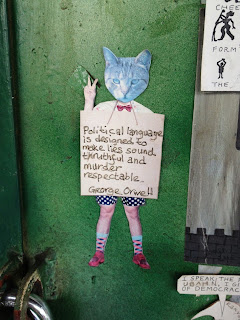 I should know more about the mythological / historical figures represented on this Chinese Buddhist door than I do but Alvin and Pauline were there to explain them and how to read them. I was seeing them primarily in terms of form, all swag, swirl and billow, a design verging on symmetry but not quite given over to it. The style of depiction is familiar but not the code. It is fierce work in its way, the foreign eye lashed by visual waves, drenched by the obsessive detail and high-pitch colour. There is the underpinning in narrative too, the narrative of significance and meaning, a narrative I always assume is there but which I rarely absorb on a reading. I am dazed with an overload of information and the explanatory detail passes me by. Not just on this occasion but all occasions: my poor registering of narrative is one of the reasons I haven't written a novel and am unlikely to write one unless it is shot through with texture and presence. But Malacca is a new place entirely and impressions shower on me like one of those deluge-like rains we come across from time to time on our tour.

Underneath the temple door there is a bohoish wallful of cats in collage, often with texts. There's this one above. Another says "Only the poet can water an asphalt pavement in the confident anticipation that lilies will reward his labour." You've got to try it, I suppose. Credit for neat expression. This is a cat that has been places. Possibly to San Franciso. 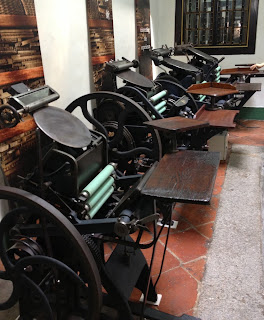 Karl, Clarissa and Pauline have all taken better photographs of this visit to the Royal Press in Malacca. Clarissa's are there if you click on the link to her name above. For Clarissa and I this visit was like a door into the past when we worked on a press very like one of those in the picture. We ran The Starwheel Press in Hitchin from 1978 onwards, active till 1984. The name is still extant. You'll find its production sometimes on second hand book lists at ABE, priced much higher than we ever priced. We had an etching press in the cellar and the monotype press in an outhouse. We produced portfolios of etchings by five artists (including ourselves) and five poets (not including me).  Presses of this kind are what I have always thought of as Romantic Mechanics. Cars too were Romantic Mechanics then. You could fit a fully grown cat and a litter of kittens under the bonnet then and still get to the moving parts.

Entering the Royal Press was like entering a family house, and it was indeed a family house and family business. The light, the typecases, the printed specimens, the smell blended with the stir of a rather vestigial activity still taking itself seriously. It was a dose of the familiar. Friendly as ever, getting on with life, turning the house into a museum, but not yet a museum, still a working place. I think of the light as falling, falling like a solid object, through the two courtyards, and rumbling through the various rooms according to its own Romantic Mechanics: mechanical yet magical, sudden, perpetual, hovering. 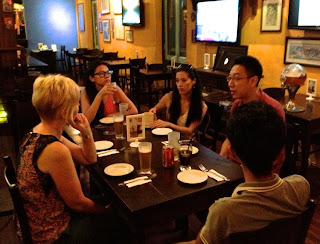 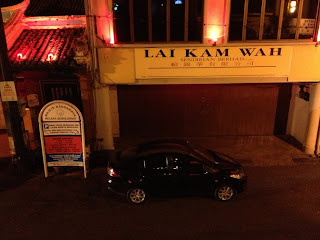 It is evening. We park the bus and set out to find a bar/eaterie that Alvin remembers. But it is closed. The owner has gone off on a holiday. Down the same street we find this. We are all sitting round the table upstairs, Clarissa, Iqa, Pauline, Alvin and Karl (Eddin couldn't come on this trip). This place has a sense of presentation but we are the only people upstairs. A TV screen shows repeated clips of a resident band that is not playing tonight. Another displays information on Malacca. I get up and take a few photographs because I sense there is something photographable here. The walls, the space, the windows and doors. I look out of the back window and there is a car, like a silent question, poised under a sign, a name. Yellow, red, black, and the deep brown of street lighting in shadow. It strikes me like a half-heard song. So there it is. And this table. It is a poetry I understand, a still-life of practically nothing, just light. The setting for still-life. Profusion dazzles me: this half-vacancy immediately finds its way to my heart. 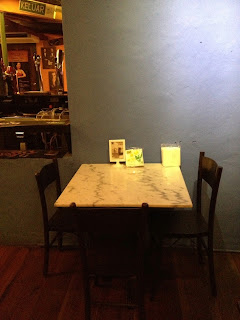 Then we get back in the bus and drive back to KL.