Malaysia Postscript:
A few photographs with notes 2, the events

Musicians from the Kelantan Wayang Kulit performing in the auditorium of the Central Library in KL. Although this event came at the beginning of our time it was in some ways central in that it lies at the heart of the PUSAKA movement. (see the Facebook page too)

One is always faced by one's own ignorance. I am talking about myself here of course but our sense of self, history, social-relation, and location in general is never broad enough. The point, as I took it, was that there are deeper worlds under the official versions of identity presented for national consumption and that these worlds may be disturbing because they return us precisely to those depths. Magic, healing, trance, levels of consciousness - all these are aspects of a universalism beyond locality yet, paradoxically, precisely at the heart of it. It is not nations as constructed by political and economic forces that drive us at depth, but elements of the human psyche that may be opened up at any spot on earth.

The gamelan band's music was almost entirely percussion, plus that single pipe and the healer's human voice. It isn't entertainment: its purpose is not to divert but to conjure. It looked slightly incongruous in that official auditorium, almost municipal. Out in Kelantan it would be very different.

The other main part of the event was the first PUSAKA lecture by Goenawan Mohamad. I have already said something about that in an earlier post, so I will move on to the next event in which Goenawan was involved. 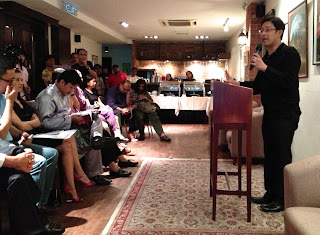 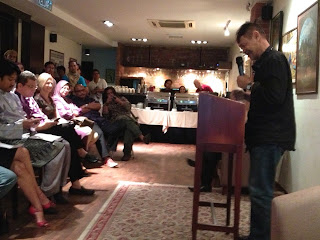 Eddin and Pauline, Pauline and Eddin. They are the powerhouses of both PUSAKA and Obscura and much more, including new publishing, new festivals, and a whole cultural-political force. Once you know a little about Goenawan (lower picture) it is easy to see why Eddin and Pauline chose him as the first writer to give the PUSAKA lecture. In his resistance to authoritarianism in Indonesia, especially through his editorship of Tempo under Suharto, he represents a democratic, internationalist, political and cultural field whose values he is very well able to articulate. In many ways I understand Goenawan to be of the post-1968 form of socialism too. We talked, in snatches, of Lukács and Brecht. He was interested in the situation in Hungary. His eyes are brilliant and alive even when he is tired. He thinks in terms of idea-as-feeling, in great historical detail, the whole amplified through experience. His lyric poetry, as I heard it,  is of place and politics, full of physical energy and desire. It would be at home in anthologies of world poetry, among the Szymborskas, Enzensbergers, Nerudas and Heaneys. Here is one poem taken from his page at the Rotterdam Poetry International website. More poems there.

THE MINOTAUR
in a Picasso sketch


Into the bed the Minotaur comes, sniffing
your body, your body hair,

that glows in heat,
and gives off

the aroma of aniseed.

Your face is ripe
like a grain of wheat

in the final field.

And the growl that makes the curtain shiver
lures you: you sway your breasts
towards the eerie and acid smells,

when desire sticks out its tongue,
its red tongue,

onto lust
that moistens.

And then, awakens. And Death

sits in the arena where the bull
scuffs his feet

and seconds seem to pour like rust from the sun,
in the plaza where fate pulls the trigger
in the waning light of Saturday evening.

Soon the room becomes bright.
And the Minotaur vanishes from the bed.

The hour seeps into the ground.

Only Death slips
from the thrill
passing

though your navel
your loins—
the imperishables.

Eddin I have already praised. He is in the top picture, articulate, memorable, clear, passionate. In cliché terms he is fire to Pauline's apparently deep and tranquil lake. But let's drop cliché. We cannot substitute clichés for people however we perform a kind of shorthand in our minds. This occasion at Ed Soo's restaurant was more informal, though there were plenty of political and cultural people present.  Obscura is a new journal containing writing in Malay, and a good deal of translation from English, German and Greek into Malay. Looked lovely.  The first issue was put into our hands the evening before in a night eaterie by the designer. It will be biannual. I have a copy here. 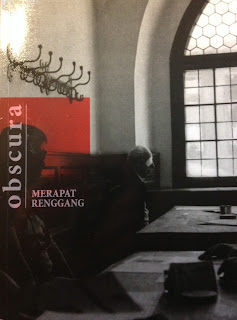 Attending these events, an inaugural lecture and the launch of a new magazine, both the beginnings of projected series, is like boarding an engine about to set off. We are guests on the train but we can feel the potential power, the energy that drives it. We can only guess the work that has gone into creating it, the mechanics of the machine, the parts that must work in concert. And, beyond that, the conditions under which it has had to be constructed and must henceforth operate

More pictures to come. More travelogue and thoughts rather than cultural events.