Lighthouse Literary Journal - How we Lit the Lamp (2)

So things were happening. Then along came the painful work of putting in place the processes needed, the back office stuff, the toad work to squat on our lives. How would people submit, and how would we edit? How would we reject people? What tone can you adopt that doesn’t sound patronising or over apologetic? We wanted an online submissions process, that much was certain, as it would be much easier to handle data than hard copy. We also felt that the size of the editorial team meant that an online system where we could log in from anywhere in the world (Angus and Laura spent their honeymoon in India, visiting an internet café with dial up) gave the editors a freedom that snail mail didn’t. In the end we got a good system which even now is being tweaked as we evaluate our editorial process, for example, we would make sure that if we knew someone who had submitted, their work was looked at by an editor less familiar. We also put in place a first refusal option, where at least two editors looked at a submission before being rejected.

Keeping the price low was paramount. We are, after all, publishing mostly unknown writers, and we wanted the price to reflect our demographic. We felt that one of the problems with journals is the prices. I remember having to read them in libraries as an MA student, as I couldn’t afford to buy them. That’s not a criticism of the journals; it’s hard to keep prices down on larger periodicals, especially if colour is involved. So keeping the journal black and white was hugely important, as well as making enough per sale to have some money to reinvest in future publications. We also felt that we should avoid applying for Arts Council funding, finding a way to create a successful business model that was sustainable on its own terms.

Grassroots activism was the driving force behind the journal. We put on fundraisers, with published writers as well as open mic events, such as the Cold Turkey Cabaret, where we were swamped with people who wanted to get out of their houses, bored stiff by the snow that had basically stopped the UK once again. We raised enough money to go to print and we launched issue #1 in March of this year. After a long year of planning, we finally had the thing in our hands, and it felt really good to see the writers we had selected in print. The grassroots activism continued with contributors such as Jonathan Gibbs hiking around various bookshops in South London pitching the journal. Social media has of course played a massive part, and by having so many people involved, we can update and post interesting things on all the usual sites. Angus Sinclair even made a short film to advertise the open submission process for issue #3 which went up on Youtube and had over 1,500 views in the first week from a Facebook newsfeed connection.

Issue #1 sold out on a print run of 250. We got the book into all corners of Norfolk, several postcodes in London, and a small bookshop in Ashbourne, Derbyshire. We also had two writers selected for a popular series of anthologies which we can’t yet reveal, but it’s been exciting to see these poems and short stories picked up by other editors.  We had a few hiccups with the second issue. Our printer, Biddells, went into administration. This delayed us by a month, taking our launch into the dusty space of August where everyone is away. That said, the launch was well attended, and our online sales and subscription list continues to grow. Issue three is about to go into production with some features by Matthew Welton and Elizabeth Reeder, and issue four will see a piece by Ian Duhig, and hopefully something from the phenomenal (and phenomenally busy) musician Alasdair Roberts.

So what’s the future?

This has all been done democratically from the outset. I wanted to manage a project that would be realised by a team, and I hope that, when I come to the end of my stewardship somewhere down the line, other editors will come on board, that the magazine retains its cooperative aspect as editors leave and are replaced.

We will launch our pamphlet series in 2014 with work from Edwin Kelly and another poet we want to work with funded by sales of Lighthouse. We are also floating a short story pamphlet subscription service, though these are early days.

But importantly, we want to hear from you, we want your submissions, we also want features, small essays on poetry or prose or literature generally, both for our print journal and our blog page. We want a space for emerging writers to discuss, agitate, chew at the bit, and create an ongoing dialogue about writing. We want, as stated in our issue 1 editorial, to create a rung on the ladder for emerging writers. This might all sound terribly over-ambitious, but we’re trying. So come have a looksee. Over to you. 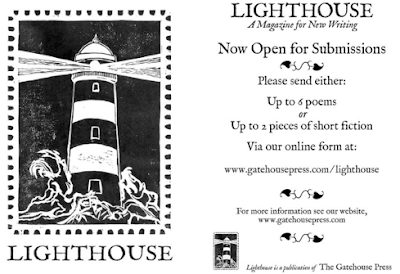 Good luck! It sounds like you are doing really good and much needed work.We operate a similar project,The Poetry Bus http://thepoetrybusmag.wix.com/change here in Ireland.Interesting that you didn't even try the Arts Council funding route.Other ways of funding are definitely the only ways ahead,the old systems are broken, or more accurately, only work for a few.
Keep it up!

It's not so much the case that we 'didn't even try' as much as a genuine belief that if what we are doing is worthwhile and sustainable then, while it may be hard going, we'll be able to fund ourselves.

I imagine there may come a point further down the line where we seek additional funding in order to expand but I feel it was important to establish ourselves (and we're very much still in the process of doing so) independently.