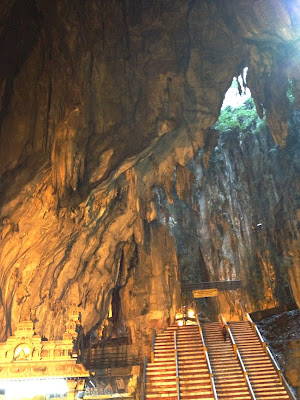 Not a particularly good shot of the Batu Caves. Clarissa probably has better.

This is likely to be the last blogpost from Malaysia as we are heading home early tomorrow morning. Yesterday the rain came down for a few hours and we took late lunch shelter in yet another eaterie, one we had been to before. The conversation this time was religion.

We agreed that most of those present had a mystical streak that was something to do with culture, upbringing, working in the arts and, more significantly, with the mind / soul / body condition. Most militant atheism was dismissed by Eddin as plain sillly. I am a deeply religious man, he said, and he talked about Thaipusam, the process of inducing trance and ecstasy, partly in preparation for, and chiefly produced by, body piercing of what would seem a most excruciating sort. Hooks attached to weights. Needles through cheeks and tongue. The carrying of very heavy images under the hot sun while stuck full of sharp objects.  (See the link and images here) He himself had undergone this. Nothing hurts, he said. There is a sense of lightness and joy. It offers discipline for the soul. Eddin is, at the same time, an Islamic scholar and, indeed, all kinds of scholar. At forty-four he seems to have led several lifetimes and can talk about each in remarkable detail, furnishing out the details with text and location. Alvin had seen such rituals himself and produced a set of photographs he had taken of the process. This form of spirituality was in his blood too.

We, for our part, talked about our own religious milieux, my own Jewish atheist parents, Clarissa of her mother's Baptist piety and father's missionary years. The ecstatic aspect of religious practice was quite absent. But there was the Christian sense of good works, of the pure form of charity, of the idea of sacrificing your life for others as exemplified by the Cross. We talked of the residual religion of northern Europe, of Puritanism and self-denial which might be Protestantism's equivalent of body piercing, but which is however a negation of body rather than its affirmation through pain or trance.

Meanwhile the rain was falling hard and long, a constant light drumming on the canopy above us and in the street just behind us. I have become fascinated by the conversations conducted in the rain, the conversation of rain itself.

It is a warm and generous conversation in that there is no conflict in it. Nor was there any in our own conversation. We listen seriously but are prepared to laugh when something strikes us as funny.

It was natural to set out from there to the Batu Caves, one of the largest limestone caves in the world and an important Hindu shrine. It's a long way up there - 272 steps which is tough on the legs and lungs but entirely manageable with a few breathers. It is well worth it. The cave has two openings to the sky. It is inhabited by pigeons, monkeys, bats, rats and cockerels. We saw little enough of bats and rats, just the odd bat wheeling in the dusk as we emerged, but there used to be far more. The bigger opening is fringed with vegetation and was dripping in the rain. The shrines are set into crevices or on platforms. There are set times for rituals. The whole cave is dedicated to Lord Murugan but Hanuman and Shiva also feature.  In the main shrine priests are preparing for the ritual as we leave. Another is reading a newspaper. There are not too many visitors at this time of day in the rain on a Sunday evening.

It is the sheer largeness, the theatricality of the cave that most strikes me. I understand the religious aspect of the experience intellectually but it rings no loud bells: at best it might produce a deep and distant chime at a point of the soul I cannot quite locate. But the formations, the fantastical erosions and protruberances of limestone on this scale produce a religious feeling of their own. It is the Sublime in the Romantic sense, the miraculous culmination of an otherness of which we are a part but a not particularly significant part. Maybe it is the best we can do in western Europe. The cathedrals are our caves as refined by the intellect and humanised by the constant evidence of human sensibility. But we know cathedrals are human. We are aware of the labour that has produced them. We make the symbols and control the metaphors. We recognise them as extensions of ourselves.

Not so with the cave. We adapt ourselves to it. We carve a little here and there, but we are essentially intruders into a different order of things. The polytheist imagination is fiercer yet less aggressive. The trances it produces are possibly the equivalent of the cave.

But I am a westerner at heart, a European whose love of Giotto, Piero della Francesca, Poussin and Velasquez is constantly in balance with a love of the more sensuous arts of Venice, the theatrical Baroque of Caravaggio, the introspective depths of Rembrandt and the notion of paint as flesh and darkness. Goya, for me, is the great carnal visionary of human pride and awfulness. I adore Goya. Goya is the world I suspect I know. I adore him but am lost in the great lucidity of Piero, the mysticism of reason and system and clear light. The clear cathedrals with their great clerestories. The reasoning of angels.

We call in briefly at Eddin's flat. It is composed of mountains of books in dim light. It is his own cave, more book than wall or floor. There are pictures too and masses of music. Boxes and boxes of Glenn Gould. From there we head to an eaterie then to a bar where we talk films and pop music, of Gene Vincent, Blondie, Billy Bragg, of disco dancing and YouTube, the lovely flotsam of our age.

Today (Monday) to Ipoh and the old tin mines. I will have to store memories of them for when we return. But I have fallen in love with these people and am intensely aware of their great humane depth, their knowledge and sense of fun - Eddin, Pauline, Alvin, and the two young ones Karl and Iqe. How good to have spent time here and opened up a new world. It will be good to return.

THis is a fascinating post, George, about religions, trance, and the cave/cathedral. Thanks! x