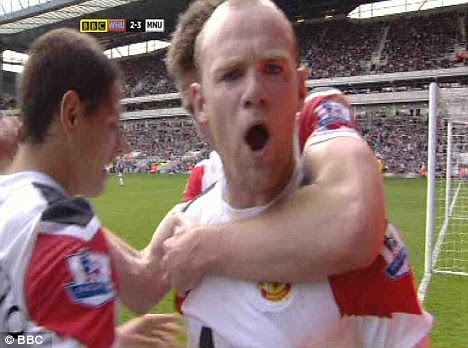 
Prodded to a football post by a contemptuous one-liner in a comment, I oblige. Having been stunned by Rooney's three word foul-mouthed rant (warning: rant quoted below), today's reading comes from The Book of Rooney, Chapter 25, verses 1 - 6.

1. Wayne Rooney is the middle class person's parody of the working class boy. If he had been no good at football he might have been arrested for bouncing on car bonnets and breaking into vehicles generally. Then he might or might not have found a job, drank a lot and got very fat and died at the age of forty five as a result of his pitiful working class indulgences.

2. Wayne Rooney has taken up the middle class habit of swearing. Swearing is perfectly acceptable on Radio Four comedy and certainly on TV but not by real working class people, especially not when thirty thousand other people are swearing at them. It is because he has taken up this middle class habit that Rooney is now in trouble with the FA which does not stand for what you might think it stands for.

4. Wayne Rooney plays for a team with a manager so Bad he keeps winning things when he shouldn't. Bad People shouldn't win things. Bad People don't talk to Good People when the Good People have accused their relatives of crimes they couldn't prove they had committed. This only annoys the Bad Manager because he is Bad.

5.Wayne Rooney, having had a truly Bad Year was so pleased to have scored a hat trick he let off a lot of Bad Steam by exclaiming: What!? Fucking what!? in the face of a cameraman who had pushed his camera into Rooney's face. This was a gnomic utterance whose object seems at best enigmatic. So enigmatic as to be Bad.

6. So now he is banned by the FA for two games, one of which is against the team's local rivals, Manchester City, whose chairman happens to be the chairman of the FA. This is of course coincidence. This comment is in the form of irony. So is this.

Much as I love football I sometimes get the feeling that the game is very corrupt indeed. Not because of the Rooney episodes, but because so much money rides on it and because so many decisions seem to be flawed. I sometimes imagine vast amounts of industrial cash flowing in bets, much as with international cricket in the recent Pakistan case. I think of FIFA and EUFA.

Then again I sometimes think the opposite. That the people running such sports are far too incompetent to engage in anything requiring as much intelligence as large scale corruption.

But then I wake up and all is right with the world.

I was shocked, shocked, I tell you. Until I read about this in the newspaper I had absolutely no idea that footballers used rude words. Of course, I have no idea what the rude words were, and I am sure they wouldn't mean much to me if I did; but I have it on good authority that they were very rude.

Sometimes I do wonder why football takes itself so seriously.

Ah, Plump! do you mean the game of football itself (impossible to picture this quite), footballers, football managers, football officials, football fans or football pundits? It's a multiple choice question. There is always the spherical object itself but it would require a definite article, as in 'Why does the football take itself so seriously?'

I suspect the answer is big (VERY big) money on the one hand, and intense devotion on the other.

And it being Saturday night I'm about to watch MOTD;)

(I just used one of those terrible winky icon things! I blame the football.)

It was something a businessman who'd had dealings with football clubs said that I'd read somewhere and remembered, then asked confirmation of from every intelligent football person I came across:

Football club boardrooms in a nutshell. I think players and managers are as varied as people are and as people come, though. Rooney has done nothing in his life that Modigliani didn't do a hundredfold.

"Wayne Rooney has taken up the middle class habit of swearing. Swearing is perfectly acceptable on Radio Four comedy and certainly on TV but not by real working class people.. the FA which does not stand for what you might think it stands for."

Yes, that. That exactly.

I am much tempted by the Rooney / Modigliani combination. I have sometimes thought of Berbatov as Modigliani, in which case Rooney might be Leger. I propose Chicharito as Carpaccio.

Caravaggio was the real bad boy. Banned for several season for bringing painting into disrepute.

I do like a little high art on a fine Sunday morning in Spring. It does for me what the smell of napalm did for that geezer Robert Duvall in Apocalypse Now.

Fuck it, I like it when you do football. And Carol Ann got Rooney into her poem.