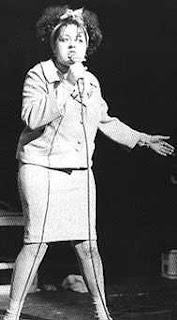 Several years ago I was at a Christmas quiz in which we were asked to recognise certain cut and pasted images (cut out of paper magazines, that is, and pasted on paper): people, places, etc. I was quite good at this sort of thing. One picture was of Poly Styrene of X-Ray Spex. I had heard relatively little by the band, maybe saw them once or twice on TV, but I identified her. It wasn't that difficult.

You ought to lose marks for knowing that, a slightly pompous voice remarked. Had my gorge risen another quarter of an inch I would have said something suitably rude but I just shrugged and smiled. I've no idea how I know these things, I said.

And now Poly Styrene, alias Marian Joan Elliot-Said, part-Irish/Scottish, part-Somali is dead at the age of fifty-three. This is from today's Telegraph obituary:

...A woman of mixed race who wore fluorescent thrift-shop outfits and proudly sported dental braces onstage, she refused to conform to conventions of how female performers — punk or otherwise — were expected to appear.

Although her wobbly, discordant shriek and the band’s music fitted the punk template well enough, X-Ray Spex’s colourful image was a refreshing contrast to the nihilism of older colleagues; The Rough Guide to Rock describes them as “a wonderful, shambling, musical mess of rebellion, fashion and fun”...

...In July 1977 a live recording of Oh Bondage Up Yours! appeared on the seminal punk compilation The Roxy London WC2 (Harvest). A tamer version was then issued on Virgin, which promptly dropped the group, but they soon reappeared on EMI, and played their biggest gig ever at the Rock Against Racism Rally in London in April 1978.

I love 'increasing musical sophistication'. I can't imagine that, to twist one of Auden's lines, "Sophistication was what she was after" but let that pass. Poly was bipolar and spent time in hospital after experiencing visions. Sometime after 1996 she was run over by a fire-engine and survived. Eventually she succumbed to breast cancer. Having once been a member of a jazz combo named Steddy Eddy and the Metronomes I have every sympathy with Poly Styrene and X-Ray Spex. There is something wonderfully Beano and Exchange & Mart about it. Sic transit omnia.

Goodbye Poly Styrene and thanks for the good times, good music and great lyrics, which were nothing short of ahead of their time and are as apt today as ever. You may Rest in Peace.