Notes towards Notes on Photography: Memento and Voluptuousness

Art on the walls: the picturesque. The American photographer Walker Evans had shown us such small comforts as evidence of the essential: the memento mori within memento mori. Here too we find the comforts of art. In one of my favourite Partyka interiors (see photo 5 here) we see two men at work in a shed. Two men in a shed, working men of a certain age, working. The comforts of art are evident in the calendar and pin-ups on the wall. They are images of women, lithe, full bosomed, smooth, soft, young, teasingly unattainable, yet sad, and oddly dignified. They offer a welcome, perhaps even necessary, voluptuousness in a place of spikes and racks and splinters. They are a secret corner of the imagination that would never be on show in the sitting room or the kitchen, the cheap fertility goddesses of desire without ambition. And beneath them, framed and carefully propped, the popular reproduction of J. H. Lynch’s ‘Tina’ the dusky maiden who has haunted a million such spaces and has even filtered into respectable terraced houses as a pin-up refined into low art. 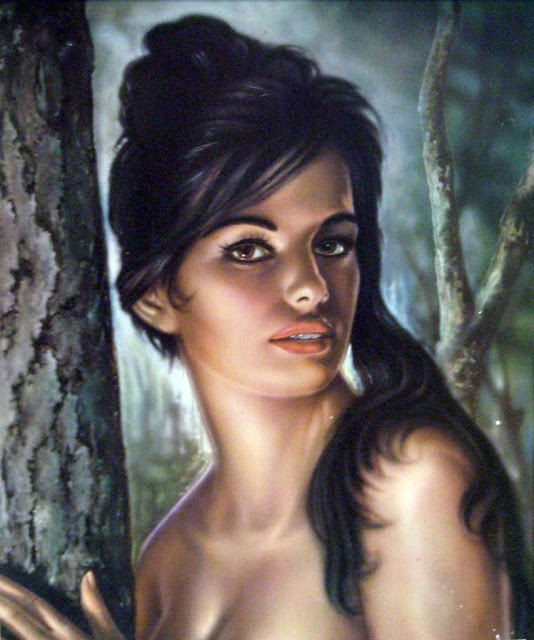 Lynch painted the same woman time and again under many different titles, with many different names, as ‘Nymph’ (1969), as ‘Autumn Leaves’, as ‘Rose’, as ‘Tara’, as ‘Woodland Goddess’, as ‘Maria’, as ‘Ladoncella’ and as ‘Evening Farewell’. It is J.H. Lynch’s version of Goethe’s Das Ewig-Weibliche, the eternal feminine that draws us on. Plump as rain, as the round red sun, She cheers us and saddens us. But all is not sex here. Over to one side hangs a sober print in a sober frame, an urban river view, an engraving or etching that opens the shed onto prospects unvisited. Any human life is several worlds, most of which worlds remain hidden and unarticulated. The photographed are not merely points in a composition or points in the viewer’s consciousness. Their dimensions are their own.

Photographs both preserve and interpret. Partyka's preferred light is often the violet hour, the symbolic light that speaks of fading. It is dusk and it is misty. Fields vanish into the distance: the furrows of the land, the rows of cabbage and beet are almost swallowed in the encroaching darkness. There is quite a lot of darkness generally, if not as dusk then as shadow or curtained or closed space. He has a palette too, as an artist does: sodden green and blue-grey edging on purple and violet, earth browns and pale yellows. There is the occasional deep and intense blue, the late summer days of harvest: the mid- and late spring days. There is the burst of yellow in the form of wheat or apples, an old door, the sunlight burning up an interior wall. And there is that powerful insistent red in a boiler suit, a tractor hub, a turkey’s neck, a watering can, an article of clothing and, deeper darker, the deep sodden red of an old wall, rhyming with all the sodden green and the other reds.

Then there are the compositions with their painterly ancestors: Van Gogh, Millet, the Soviet poster, the Caraveggiesque movement into and out of shadow. There are hints of Corot and Breughel. There is the century and a half of photography and the century or so of cinema. The idea of composition is transmitted and modified. Just as my mother posed us in post-classical states of dignified repose or formal alertness, so Partyka requires his subjects to pose for him according to his own vocabulary of visual codes. The subjects don’t pose as such, but they are selected, chosen and edited, on principles of position and composition. So, for example, in terms of colour and form we discover repetition, or what we might refer to as rhyme: a red here answers to the call of another red in the same picture, one strong colour is supported by a chorus of quieter, more subdued ones. The carrots in the hand of the man with the kitten at his feet, the windfall in the grassy yard, the blue boiler suit half-rhymes with the brighter sky behind it. So curve follows curve and vertical calls to vertical. A series of V shaped pullovers unites the farmers at the auction. The twisted and sagging barbed wire matches the twisted and sagging body of the dead fox. Big monumental forms are supported by stretches of calm.

None of this is surprising except that the profusion of the world does not provide us with composition. Composition is what we bring to it. We seek organisation and turn it into interpretation. Organisation exists, of course: the inscape and instress Gerald Manley Hopkins perceived in natural structure; the organisation of petals, of symmetries, of molecules – the physical laws of the universe; of our own bodies - is a given. But organisation has to be perceived, and in perceiving we interpret.