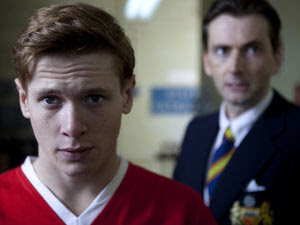 I was nine and two months when the Munich air crash happened, a year and two months after we arrived in England. We were living in London, still refugees, still foreigners. I didn't know much about football at the time, knew less about England, and next to nothing about Manchester which was to become my city of the imagination. Not so much a city, more just a stadium with a few imagined streets around it. Imagination need not be supplied with a full set of props: sometimes it is much better without, always providing the possessor of that imagination is aware of the fact. That consciousness may, perhaps, be one of the clear dividing lines between surface fanaticism and depth of feeling, even between madness and reason.

Nevertheless, the truth is you don't need much physical reality for the imagination to populate its greater or lesser terrain. It may even be as Eliot thought: humankind cannot bear too much reality. Having walked over the border into Austria, been accommodated in camps, changing countries and languages, I suppose I had had a little too much reality and none of it seemed quite real anyway. Maybe that was a period of madness. Maybe that is why I can't remember it too precisely.

I am not even sure if it was the crash that registered or what followed. The team that died in the crash hadn't entered my imagination at the time: when it did so it was by way of absence. What registered in May 1958, three months after the disaster, and I can't remember how or why, was that a team bearing the name Manchester United had reached the Cup Final despite the best of the great previous team having just died. The new team got to the Cup Final and lost there to Bolton after the goalkeeper was barged into the net by Nat Lofthouse. The goalkeeper had to leave the pitch and that was the end of it. But the team that had died were so intensely present throughout, precisely because of their absence, that it left a great impression on my childhood mind. It was the ghost team and their living shadows that settled there. They took possession of the terrain, that sacred illuminated space illuminated by whatever answers to desire and loss.

Or so I think now. I can't really know. I don't think we had a television at the time of the 1958 Cup Final but we might have just bought our very first one. I don't actually remember watching the game. I had learned English very quickly, top of the English English class at my rough primary school within a year, so I might have read the news of the team in a paper, or maybe heard about it on the radio. Too many 'or's here, but it's the best I can do.

How else to explain it? My father had taken me to a match at the Népstadion in Budapest some years back, and there I faintly remember being struck by the heraldic colours moving across the pitch. One of the teams playing that day was, or so I am convinved, Ujpest Dózsa who played in a sumptuous violet. So a little of the heraldry of the occasion - the significance of massed colours and the wearing of favours - might also have been part of the brew. Once in primary school, my second one, I started playing football myself and was picked for the school eleven, winning a local cup in the process. I now had a working stake in the game, and understood how it felt to play it. I played centre forward for Oliver Goldsmith Primary. I wanted to play for England and was disappointed that I couldn't because I wasn't born in England.

I knew someone who was though. Once we had a television I watched black and white football with dad, and immediately noticed the blond haired Bobby Charlton, who was, I understood, a survivor of the crash. Charlton was boyishly magnificent. He strode and swerved and struck the ball so hard it made the net bulge. He drifted past opponents with the slightest swerve of his body. He was the blond hero who was so utterly unlike me that he immediately occupied the commanding space on my imaginary terrain. Manchester United were definitely going to be my team.

That would have been 1959 and United were about to undergo a dip in quality and performance. In 1962 I went with dad to Craven Cottage to watch Manchester United play Fulham. I think Fulham won despite Bobby Charlton. I asked dad afterwards if he thought United would be relegated? Seeing me on the point of tears, he reassured me that it wouldn't happen. It didn't. Only just though. United finished 19th that year out of 22.

So my glory-hunting days began with a disaster, a lost glory, a significant absence, and a sense of sinking, with only Bobby Charlton remaining to save the world. To put this into an Easter framework, if Munich was Good Friday, anything between 1958 and 1964 was the time in the tomb. It was only after 1964 that the Resurrection flickered into being.

And maybe that is why the BBC chose Easter Sunday to broadcast United, the first drama based on the Munich disaster. It was, of course, drama not documentary so all the survivors' surviving relatives' complaints that the actor playing Matt Busby was wearing the wrong hat, or that Jimmy Murphy never spoke like that, or that Mark Jones (or was it Eddie Colman) certainly never smoked a pipe in the tunnel before a game, or that some members of the team or backroom staff were never mentioned were, sadly for them, beside the point.

But then what was the point? It made sense to concentrate on three figures: Busby, Murphy and Bobby Charlton, with Charlton as the juvenile lead. It was never going to be a Cecil B. De Mille epic with Eric Cantona in a cameo role. The opening shot was lovely. The boy who played Charlton looked genuinely like a cross between Charlton and an early David Beckham, but was probably a touch more gormless than either at that age. Busby was played as a self-confident private eye from the mean streets of slightly gentrified Glasgow and David Tennant's eyes bulged quite as well as his jaws worked as a taller and slimmer version of Jimmy Murphy.

All well and good, but what was the point of trite dialogue that was far less mature than my nine year old imagination imagined back in 1959? My childhood imagination had cellars and attics, great corridors, terrifying sound effects and plenty of shady rooms. This was written in the dull parlour of stock pieties. It was costume drama written for costumes. I sat through twenty minutes of it, my ears curling in embarrassment at info-dialogue interspersed with mediocre truisms. Even when people speak in truisms (as the Jimmy Murphy character seldom failed to do) it does not strike them as truism: it strikes them as life, and it's life we want not second-hand shagged out truism. The secret languages of the imagination turn the trite into electricity. The task of the playwright is to be the conductor of that electricity. Pinter could do it. Beckett could certainly do it. United? As much electricity as a stuffed eel. Where is Frank Cottrell Boyce when you need him? Probably watching Liverpool.

None of this was the actors' fault. Gormless Bobby was a touch too gormless. David Tennant was working a bit too hard to kick clichés into life. Sir Matt Busby looked pretty good, the Sam Spade of Manchester, but little beyond that. The rest of the team was like a pack of cigarette cards.

Oh reader, I confess I turned off after twenty minutes, unable to bear any more. If anyone wishes to write to correct my rather damning impression you have a few more days while the thing is on iPlayer to do it. Perhaps it all got a lot better once they were dead. But that would be a rather too much like the real life of the imagination.

Umm. I think it's quite well known that Mark Jones smoked a pipe. Whether he smoked a pipe in the particular way shown last night is, as you say, beside the point.

Bobby C. was a bit too gormless, agreed. Matt Busby wasn't fleshed out enough, though his son's complaint about him being shown in coat and bowler rather than in a tracksuit is, like the pipe query, irrelevant. I felt David Tennant as Jimmy Murphy was good. (The Welsh accent sounded convincing to my admittedly non-Welsh ears.)

I think perhaps the main problem with the drama is a problem it could not solve, a problem inherent in the story it was exploring : what happened with the Manchester United team WAS tragic, almost unbearably so. It wasn't a complicated story. Some young, vibrant and very talented men were struck down at the height of their youth and vibrancy and talent. There can be no ambivalence about a story like that. People rallied round, sent in donations in the form of postal orders, wept in the streets. No ambivalence there, either. Jimmy Murphy was a decent man doing his best in terrible circumstances, Matt Busby, ditto.

Now if I was exploring that story, I would draw out the way that Busby felt GUILTY about what had happened. This guilt apparently hung over him until the European Cup triumph 10 years later when he said that he finally, finally felt "cleansed."

I think perhaps the main problem with the drama is a problem it could not solve, a problem inherent in the story it was exploring : what happened with the Manchester United team WAS tragic, almost unbearably so. It wasn't a complicated story.

That's dead right. I have watched it through now and, very strangely, your comment arrived right at the moment I had finished watching it.

Your comment is very good. The hint was that Hardaker was to blame for being a petty vengeful bureaucrat. That might have been the case.

But there is a deeper point here bound up in the bit I've quoted from you above. I'll explore it a little further in a postscript blog.