A Wild Day for the Romanians 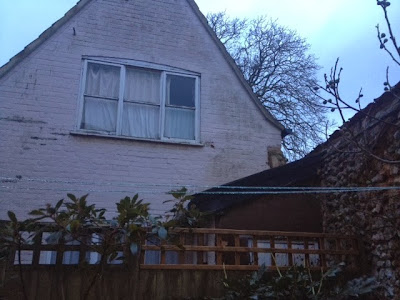 A wild wind, the rain thin, not yet in full fury, the whole sky like a clenched fist. A harsh day on which to greet that supposed flood of Romanians and Bulgarians, all 'seeking benefits'. Few seem to have arrived on the first flight.

So much of politics is gesturing under pressure. The Tories are afraid that UKIP will steal their votes so they talk tough on immigration and pull stern faces. In so far as Tories represent the wealthy and their vested interests they haven't much to fear. A few Romanians are not going to impinge on them. It is different with the poor and lower middle class. Theirs is the true contested political terrain.

In this complicated, vestigially class-orientated country what counts as good or bad for you may be as much psychological as practical. The sense of security is closely associated with stability. Things are manageable while they remain the same. Even when you are squeezed you can cope as long as you know where the pressure is coming from. Hence the deep conservatism of the working class and the stoicism of the underclass. The more pressure you are under the harder that stoicism has to work but at least it is a recognisable form of work. There is, of course, a conflicting desire for change but change is fraught with danger. The super-rich are out of reach. The way they got there is too hard to handle and if you handle it wrong everything collapses on top of you. No one is going to insure you against dropping further down the scale. There is always further to fall.

Pressure produces conservatism but it also produces reaction based on very local concepts of injustice. Anything that threatens further insecurity will be located in some immediate, identifiable cause. It is a very simple line of reasoning:

The foreigners take our jobs. Who allows the foreigners in? European bureaucrats who care nothing for us. They talk about 'justice' but it's all theory to them. They don't know or care who pays for it. We pay for it.

The little injustice that may have to be addressed - if there is anything at all to be addressed - is as nothing compared to the big injustice whose correction is fraught with much greater danger, so fury is concentrated on the immediate and identifiable.  The matter may be safely stirred up. The raw material is there.

It has been UKIP's task to do the stirring, but the constituency is traditionally Tory.

I don't much like the term 'lumpenproletariat' but maybe that is what most of us have become. And we're basically nice people who are friendly with the neighbours and kind to animals. We give to charity. I say 'we' because I don't want to patronise such people. That's too easy.

This is the demographic defecit yes?

Witnessing the hate and dirt anti-Romanian campaign, I cannot prevent observing how savage is the ordinary Briton. I'm not speaking about the media, but about the ordinary people. You defintely have a savagery vein, you English.

I will treat that as the comment of an ignorant man, Roumain. I am not myself English but believe the English have a very long record of tolerance. Try looking around any English city to see how many people from how many cultures live in England. Try seeing how little inter-racial violence there is in the country. Note the lack of electoral success of the BNP and the far right and compare it to France.

The English have a long tradition of calling anyone who is perceived as being 'other' a 'foreigner'. What, after all, does the word 'Welsh' mean? Yet it was the Welsh who were the indigenous people, and the English who were the 'immigrants'.

The English are a mongrel nation who seem reluctant to admit it - and to need the idea of 'pure blooded English' as part of their mythology. A curious mixture, therefore, of tolerance and intolerance. And of course, I'm one of them!

And therefore a curious mixture myself!

I recall the Milk Race of many years ago which was a cycle race around Britain. The Rumanian team arrived without bicycles for the simple reason they had none. A British firm, I think Halford's, donated the bikes and the Rumanians were able to take part in the event. I just mention that example to show that the British people in general are not the savages that some would have us believe. The truth of this will become apparent during this very year as nations commemorate the 100th anniversary of the outbreak of the Great War which began in 1914.
I remember the deportations of Rumanians from France a few years years ago. I believe The French President Mr Sarkozy (Hungarian) sent 8,000 of them back to the Balkans. I saw some of them in buses passing through Austria.
The trend in the EU now is to cherry pick the talent. Rumanians will not be exempted. Many are studying in the Austrian universities which as far as I know still provide free education. Austria also imports fresh produce from the Balkan farms.
Xenophobia has no place in today's Europe.

The odd thing, Jeni, is that I have lived here 57 years now and haven't noticed any great demand for pure English, if only because the Engish know it is impossible. Demand for pure Aryan bloodand pure Hungarian are familiar to me. I have heard at least one Scottish academic lament that she was not pure enough.

I know other parts of the these isles tend to think poorly of the English but I defend them because I have not personally known any ill of them and any major vice they are supposed to possess is generally trumped elsewhere.

And I fully agree, Gwilym. Xenophobia as no place in today's Europe. Which is one of the best reasons for sticking by Europe in my view.

'Xenophobia has no place in today's Europe. Which is one of the best reasons for sticking by Europe in my view.' Amen to that!

You haven't perhaps mixed with as many people in non-academic/well-educated circles, George. I have - in the lower Clerical/Executive ranks of the Civil Service, and in companies such as G4S - and I've heard far too many 'pure-blood' comments, even from people whose surnames indicate anything but a purely English background! So I have to disagree with you.

I have just finished reading Dostoyevsky's House of the Dead. The convicts were of all 'types', ranging from in the pecking order from Russian nobility to gypsies . And as I read the book I became aware that each 'type' had his place and function in the daily activities of the prisoners and even in their contribution to the running of the prison despite the presence of the second-in-command a despotic Major. There were vodka smugglers, pimps, money lenders, singers, comedians, painters, men with knowledge of horses, and so on and it was only the nobility who had no real function and in fact they had it easy, and although they had no function in the sense that they did not need to contribute anything they in fact provided a place for lower classes who were constantly brutalized to direct their anger for they could not direct it at those who ruled them, those with the rods and the birch. And in the end I concluded that the prison was not unlike a mini-EU in the sense that it all required a mix of all 'types' in order to function properly and the that the authorities were aware of this and planned accordingly.