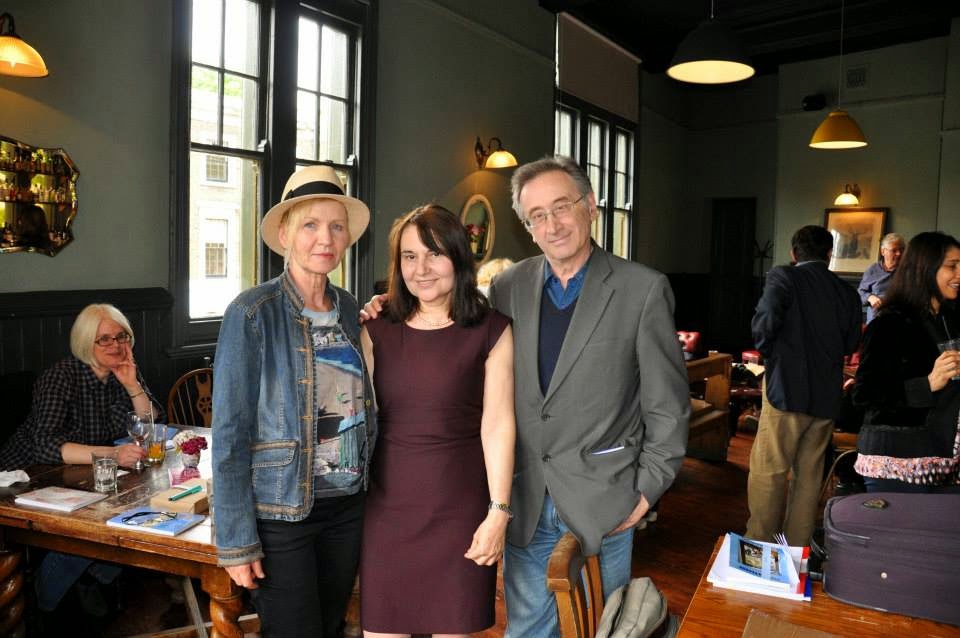 At The Roebuck. Clarissa, Aprilia and I.  Anne Berkeley at table behind Clarissa.

It is Saturday, the hottest part of a hot day, the sun blazing, the sea fizzing with tiny detonations of light. I have no sun-block but am standing in front of a beach hut gazing into both sun and sea. Right below the hut is a narrow concrete promenade, below that the beach itself, all shingle. We have turned up at the advertised time of 11am but there is no one there yet apart from H who invited me and N, the chairman and J, treasurer of the festival who are busily setting up some bunting and a portable sound system. We chat, I sort through my books and watch walkers and cyclists glide by.

How did I get here?

Having returned from Hungary early on Wednesday morning I set off to London on Thursday to make the closing appeal for support at the Poetry London reading and launch of the Summer issue at the South Bank. I am doing so because I am a new trustee of PL and the board and editors think it right that I should play this role on this occasion. PL is an outstanding magazine for which I have reviewed for many years and where I have, occasionally, published a poem or two, though not for a long time now.  Living in Norfolk  may not be the best qualification for serving on the board of a magazine so conspicuously London-based but PL is international and very broad in its range of ages and styles. Most of the trustees do live in London or relatively close, I think, though I am not sure of that. The international aspect of the reading is however indisputable because three of the poets, D. Nurske, Angie Estes and Matthea Harvey, are from America and the fourth (the first to read) is Niall Cambell from the independent republic of Scotland. It is an excellent reading, very well attended. I say my piece which involves using a device from one of Harvey's poems (the word 'Look!' repeated before every point I make) This seems to go down well and I am told I am good at this sort of thing. That is pleasing but it's not the kind of thing I have ever looked to be particularly good at. If all else fails with the poetry I could become a before- or after-event speaker, I suppose. That's after I become a bar pianist for the very drunk and tone deaf.

After the event we all go for supper at the nearby Pizza Express which is enormous enough to accommodate a table for twenty-four along with thousands of others. It's all delightful and we chat. I exchange books with Dennis Nurske (I have bought one book of all the poets except Cambell but I already had his).

Then on to the Jubilee Line to Stratford to spend the night at son Tom's house. It's a marvellous time to talk to him and the next morning is free enough for us both to go to Central London and see an exhibition of photographs, followed by a coffee. Having left my trolley and book bag at his house we return there and talk more over a Vietnamese soup at the Westfield Centre. Then Tom goes off to his place of work and I catch the tube to Borough to a launch and reading at The Roebuck in Great Dover Street where some twenty poet-contributors are gathered in honour of the anthology, Poets in Person. Both book and readings are the creation of Romanian-German poet Aprilia Zank who is extraordinarily dynamic. We are in the upper room of the pub. People read for five minutes, I am accorded ten. Clarissa arrives just before we start. It all goes well - the poets are all real poets and however unreal my life sometimes appears, I too am real.

After a while Clarissa and I have to leave as we have to be at the next gig which is down in Folkestone. Which is where the beach hut is. Which you will find in Part 2 of this blogpost.