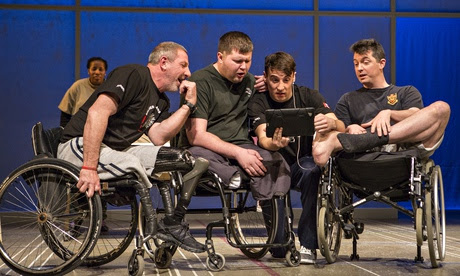 
Ater the break Owen moved our attention to the military sphere. He began by tracing the word back to the 17C in English usage (the nostalgia of Swiss soldiers for the mountains and the ringing of cow bells) but also to its Greek roots in nostos (home) and algos (pain).

His case was that young soldiers’ nostalgia was not for home but for war itself.

He talked of the sense of loyalty, even of love, as felt between young soldiers under extreme conditions. He had spent considerable time with them in preparing for two important works, Pink Mist, and The Two Worlds of Charlie F. The soldiers had served chiefly in Afghanistan. They were mostly very young, working class men who had joined less from a desire to be in the army than from a longing to get away from home.  Their nostalgia wasn’t for the army as such but for the moment of battle, for the heightened sensation of  killing and facing death.  Battle, Owen argued, was what defined them as soldiers. The turning point for them comes when a comrade is killed. Once that happens they feel both love and the desire for revenge. Love defines their response. For them the army is the strongest bond after and beyond family. It is where life becomes both precarious and precious.

This distances them from society. they grow to dislike the popular idea of heroes. They want to own what Owen called ‘the full spectrum of their experience'.

The first response was of pity and alarm. The manipulation of young men was distressing. They were all men, not women, someone noted, and wondered what the response of female soldiers might have been. To many present war seemed an unhealthy object of nostalgia but it showed that home wasn’t necessarily the object of desire. Someone remarks that Tennyson’s Ulysses couldn’t wait to leave home. Was the military in itself a form of home for young soldiers? There are Vietnamese students who feel nostaligic about the Vietnam War regarding it as a heroic period, says one. A jihadi fighter’s object of nostalgia might well be for a home he didn’t know or inhabit, says another.

The experience of war being so emotive it was not surprising that we were drawn a little away from the notion of nostalgia to focus on the experience of war. It did however succeed in raising questions about the idea of home as the chief object of nostalgia. It wasn’t necessarily homesickness for the ‘land’ in Edward Thomas’s fingers that motivated the young soldiers but the an intensity of an experience that defined them, an experience associated with love.

The questions raised about home, about place, time and occasion found other expression too. What was the point of the war and had the war been successful? Owen added that being told that they had fought for nothing was, for soldiers, like being wounded.

Is nostalgia, in this version,  the desire not only for comradeship at times of trouble, but for the moment of danger, the rush of adrenalin, the loss, and the taste of death? And if so, what becomes of that nostalgia once the moment of action is over and the soldier returns? What use is that nostalgia to him (it is generally a young man) and how is he - and those in his immediate circle, and in society generally - to recover from it? What is nostalgia to the wounded recruit, to the poor bearer of death?


PROVOCATION 4 by Wojciech Tochman was to take us even further away from the world of perfumes and bromides, into the realm of real and present violence where death has no time for the imagination. That's the next post.

Very interesting , the subject and the actual writing of it. Thanks.

I agree - 'Nostalgia' seems like an excellent subject choice and these posts are great. Can't wait to read more!