The complication is this: the event is scheduled to run from 11am to 3pm and there is neither set order nor specific content. All I know is that another poet, Leah, who works in prisons, with children and with women's groups, will come along and read something and that she might have a group with her comprising others who might want to read. And that there might be children who might want something to do, like draw or write something. Usually I have some idea of how long to read, when, and to whom. People who come along to poetry readings usually begin with a liking for, or maybe a curiosity about poetry. But this is just a pretty beach hut over a beach.

About noon people do begin to appear,  three or four at first, women and girls but no children. Shall we start, I ask. Yes, perhaps we should, says H. Is anyone going to introduce me or the event, I ask. Why don't you do it, comes the answer. This is awkward as the host usually makes some gesture of introducing the guest, but I can see what my role is likely to be. I'll be introducing and timing everything, effectively both performer and master of ceremonies for some three hours.

Since there are seven or eight people in front of me now I decide to read fifteen minutes of poems for children because anyone can understand and have fun with these, though I do preface it with a poem about anxiety, a state I certainly feel. There are three young schoolgirls of seventeen or so, two of whom will want to read. They are very nice. One says: I usually write angry feminist poems. They are friends and protegées of Leah.

I do the children's poems and they seem to go well as far as I can tell. More people appear in the course of the reading. People pass by on foot, on bicycles or skateboards. Some carry on talking, some do not. I have no idea what the rest of my programme will be. Leah has arrived by now and I ask if she'd like to do some fifteen minutes next, but before she can start another woman leaps up and reads a poem she has written specially for the occasion while she was putting on her make-up this morning. Once she is there it is probably best to bring in a group of other readers from the floor and have Leah follow them. It doesn't matter which way round we do things as there is no programme. 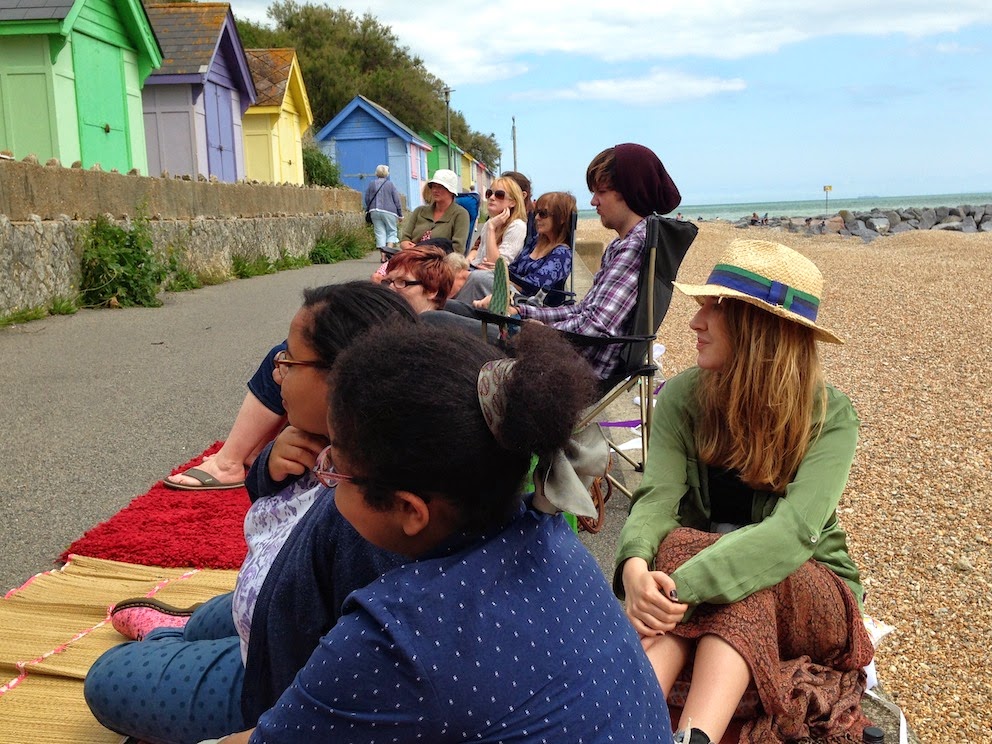 Of the three schoolgirls (they are the three nearest figures above) two read and turn out to be very good indeed,  not one of their six poems either angry or particularly feminist. The second produces a rather marvellous fantasy with some well-handled formal devices in her last poem. They are talented - and quite likely Leah will have helped them. So that's a good thing.

Then Leah does her first set which is chiefly poems for children, involving movement. She asks the audience to join in and do the movements with her and one or two do sowith enthusiasm. She then reads a couple of adult poems and these are warmly greeted. I proceed to do my unplanned second set which involves reading from the New and Collected Poems that I have on the Kindle because the actual book is 520pp and weighs over 1 kilo. Reading from the Kindle is fine in normal circumstances but not in bright sunlight. I can hardly see it. I read from very early poems because they are nearest the beginning. It's odd. I manage but it's not easy.

Time for sandwiches and cakes and tea. The nearest toilet is some ten minutes away so there are frequent excursions to it. But we have filled three sets and it is getting on to 2pm.

After sandwiches we recommence. I do my MC-ing once more. He could be a stand-up comedian, I hear one of the organisers saying to the other. I can do it sitting down, I comment, and go on. Two more readings from the floor (a man has come to join us and a male photographer, while a make prospective university student has been hanging around the edge). Then Leah does her second set and I come back and do a third set made up of a mixture of things including excerpts from Langoustine. I think it goesl allright though I am not sure. Everyone seems to know everyone, but I have never met any of them before so it's hard to tell. In any case, it's about 3pm and time to stop. The treasurer of the festival thanks me, and what remains of the audience chats. Some come up and say they really enjoyed it all, and the three schoolgirls pop into the beach-hut. They are utterly sweet and charming and as bright as several buttons. Come back, they say.

So it's all good. H takes us back to the hotel. Event over. It has all been a bit post-hippie and vague but it achieved some kind of shape by the end. My arm is roasted bright red as is my forehead.

After resting a little we go for a walk and look for a restaurant. Away from the hotels, and it's just a street away, Folkestone takes on another aspect. The town above the Victoriana grandeur is poor and jobless. A number of shops have closed. The restaurants look a bit desperate. This is Austerity Street and it's not about to recover. It is like Yarmouth has been but this street is bleaker, more frayed. There are bound to be brighter and more prosperous parts of town: here the contrast to the magnificently ornate Victorian promenade is stark. We return to the prettier parts near the hotel and have an Italian. The whirligig of time has always brought in its revenges and it's still whirling.

It's lovely to see that you've written about your time in Folkestone! Thank you for coming; it was wonderful to have you here and reading your beautiful work. Might I fill you in on some things? (In case you're wondering, this is Josie, the erstwhile angry feminist. Thank you ever so much for your comments, both in this post and at the event itself. It was wonderful to be listened to by you, and to hear your recommendations and your compliments. Elizabeth Bishop, by the way! When I got home I realised that I had read her sestinas, but not, unfortunately, retained her name. I'm anxious to get further into her work. Thank you for mentioning her.)
First, I'm kind of sorry that you felt awkward about the event's organisation and were slightly shunted into MCing. I think it was an experiment, and Rosie and I came unsure about what was happening or whether we were to read... so you weren't alone in your anxiety. I was glad that we managed to get it going, though, and your pieces were gorgeous and unforced, despite the conspiracy between your Kindle, the sun and the mildly bizarre set-up.
Secondly, Rosie and I wrote our poems without any intervention from Leah, or each other, or, you know, sanity, which might explain their idiosyncrasies. We've agreed that we need to read more, and proofread more, and critique each other's work better. So that was a good thing.
Third, I thought Langoustine went beautifully, or, at least, I liked it. It reminded me of Eric Chevillard's The Crab Nebula, if you've heard of it-- it's similarly surreal, similarly crustacean.
I realise that this is a very long comment, but I had a lot to say. It was a pleasure to hear your work and a pleasure to talk to you. I loved your canzone.
Josie

What a marvellous comment. Thank you! I think it was something someone said that made me assume you had been in classes with Leah so I'm sorry I got that wrong. In any case your poems were very unlike hers, which - if she had taught you - would have reflected very well on both her and you. I didn't mention you by name because I wasn't sure I'd get it right - and that's because it is a little disorientating performing, especially in a new kind of way and while feeling partly responsible for the whole event and partly anxious for having, perhaps unbidden, taken it over. But you three were so lovely and generous and the two of you who read were such a surprising pleasure to listen too, sophisticated far beyond your years, that it made feel I could read something a little more difficult, a little less sunny.

The canzone I read was one of about a dozen I have written over the past five years or so. I am delighted you liked it. I so enjoy reading them. I wish you every success in the future and suspect that, given your due share of luck, (such as I have had) it will find you.

Do let me know if you care to. You can find me on Facebook and Twitter as you know. And thank you again for coming, reading, and helping to brighten an already bright day.

Thank you ever so much for replying; it is honestly lovely to have heard (and to hear) from you. I hope I shall hear you read again sometime, and I will indeed let you know if luck does find me and something wonderful happens to me or to my writing!