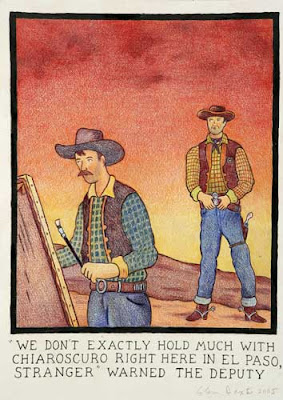 The Cinema Gallery at Aldeburgh rapidly fills up with the great, the good, the bohemian, the louche, the soigné, the artistic, the professional, the player and the played-for. Introduced to Glen Baxter (see above) who, along with Biff, has kept me amused for decades. His hair is spiky and he sports a moustache. He should be signing books for me but I sign one for him. This is quite wrong. Also there among the names that won't be dropped chiefly because I can't remember them, Neil Powell, with whom I used to teach at the vegetarian, progressive etc school that was opened by Mrs Besant and once kept its own goats for milking purposes. NP is a poet though latterly more a biographer, of the Amises pere et fils, of Roy Fuller, and next, it seems, of Benjamin Britten, while being about to return to poetry in the grand fashion via PN Review. A literary Berlin Wall has stood between myself and PN Review (aka Michael Schmidt) for almost thirty years. NP threatens to remove a brick from it. Which of us is East Germany, Schmidt or I - is a subjective matter. Also meet once fellow student at Leeds, Rose English, for whose work see here and, more gloriously, here. As for my collaborator, the artist Ronald King (whom I once called "the Pozzo of the printed page" in a magazine article), see, grandly, here. That is far too many linked here's.

Liz Calder stands on a box and makes a brief speech. I stand on the box and read one poem from the book, this one:

Librarian of the universal library, have you explored
The shelves in the stockroom where the snipers are sitting,
The repository of landmines in the parking bay,
The suspicious white powder at the check-out desk,
The mysterious rays bombarding you by the photocopier,
The psychological disorder of the filing system
That governs the paranoid republic of print
In the wastes of the world?

So I might be East Germany after all, though this poem is from a book about a book that is set in Vienna, in the Thirties.

After the event it suddenly dawns on us that we may as well go to Liz's down the next B road, and since it is others who press us to this dawning, we happily acquiesce and stand and happily chat round the long table filled with garlic bread and salmon and chicken salad and other nibbles. Outside the moon is staging a particularly golden-coppery appearance and some of us hang about in the garden looking at it. It does its moon act to perfection, so when eventually we drive home we stop the car, mount a small wall by the hotel and watch it, more silvery now, hold a clean straight line over the sea, almost Edvard Munch, with just a touch of Edward Ardizzone. It is beautiful. It hangs, we perch. Inside, a couple of people are still leaning on the unattended hotel bar. Midnight.

This morning to Dunwich. It is extraordinary that having lived here fifteen years we have never been to Dunwich, albeit once we get there, it turns out exactly as I always thought it would, that is to say as a beach, a heath and two car parks. Redolence is what people come for, the legendary silent bells that, once in a blue moon (not a silvery or golden-coppery one) may be heard to ring from under the sea where the great medieval city of Dunwich lies drowned, as will eventually the museum displaying the scale model of the medieval city in its pomp. Upstairs, a short film about the erosion that led to the drowning of Dunwich, runs on a loop and there is a small hut, a smuggler's tableau, in which, when you enter, you are addressed by the voice of a Norfolk-cum-Cornwall smuggler. Also upstairs, a selection of natural life in taxidermented form, and paintings of the Dunwich that was in the nineteenth and early twentieth centuries. The voice of the lady below starts her brief informative lecture for the sixth time since we have arrived.

The faces of over 180 dead British soldiers stare out at us in the copy of The Times at the Dunwich pub. There will always always be faces. It suddenly brings to mind the faces of the dead we ourselves have known.

And now we are tired, and C feels a bit sick, so we have abandoned plans for an orgiastic night of cinema and dinner out and have narrowed our horizons to the latter only. The wedding on the front page was in fact ours of course, and much like that. I don't do much autobiography but the church and the way of being it stood for is a proper subject. As is that many splendoured thing, love, of course. Only differently. With its proper, mad, sober, ragged and rugged appurtenances.

ps I notice that NP is PN back to front. Is this an omen? Is it sinister? It is certainly significant in a way I cannot quite put my finger on.