It's good, it's interesting, yet it's no good, it's dull. The story of concrete poetry in the current ICA show is essentially a 60s-70s story in which the main figures are Ian Hamilton Finlay, Dom Silvester Houédard, Henry Chopin, Lilian Lijn (see above) plus miscellanea from Alisdair Gray, Carl André, Robert Smithson, but for those last three it is a minor side-line. Others too, some to be mentioned.

These are just first thoughts not an essay, and brief thoughts at that. The chief argument for concrete poetry, as someone in the catalogue says, I think it's Finlay, is simply that it is 'beautiful'. Well, Finlay often is beautiful and, generally, the more simple the more beautiful. Of the others Dom Silvester seems to me a decent old buffer making patterns with a typewriter and adding mystical references. Vito Acconci is sprightly with lists of marginalia in telephone books (I like marginalia in any form and want to write more myself). Both André and Smithson induce a certain tedium in me as do Henri Chopin and Lilian Lijn. I know it's ideas, and I know it is play, but it seems dull play to me. Vieux jeux. Francis Stark plays a buffoonish straight face.

Ideas are good, but ideas without soil go dry and grow arid. Finlay - who is head and shoulders above anyone here - has his feet on a kind of solid ground. He loves things. He loves boats. He loves the names of boats. He loves revolutions. He loves stone. He loves gardens. The man loves life and there is clean air in him.

I think I know what bores me in much of this exhibition! It is - strange to say - verbose. Words as things are OK but they are disposable without things beyond them. The theory is verbose, the product is verbose. Which may be a good point at which to stop pounding this keyboard.

In the meantime four cheers for Ian Hamilton Finlay. Let him have the last stone (not from the exhibition). 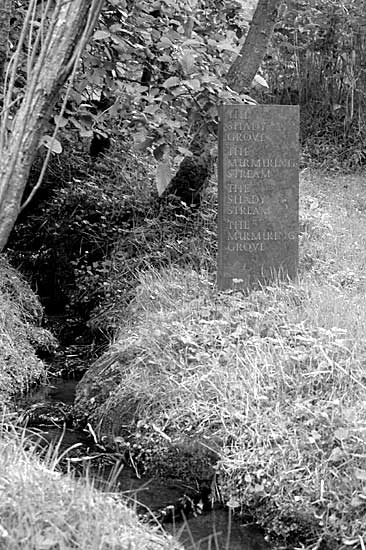 I wasn't aware of the ICA exhibition - I'll check it out when I'm in London in a couple of weeks. Interesting that Bob Cobbing's not given a mention. He was the centrepiece of the 1st Text Festival in Bury a few years ago,(http://www.textfestival.com/for more about the recent 2nd festival), and his work, at least, seems to point the way to other things, rather than fossilising in that early seventies concrete block. Recent work from people like Tom Jenks (http://www.ifpthenq.co.uk) shows that there's a way out of the concrete overcoat. After all, wasn't George Herbert's "Easter Wings" an early (and remarkably good) concrete poem?

It was a far from comprehensive exhibition. They didn't claim it was, nor was there anywhere near enough room. But Cobbing's exclusion is a surprise - maybe they had him down primarily as a sound poet.

Easter Wings is a fascinating case. I think it relates to a number of 'emblem' poems. ( http://www.webmasterworld.com/forum80/67.htm ) which originally described emblematic pictures but which, later, could look like this:

(By the way Panofsky who is mentioned in the current catalogue is also referred to in my first link: Studies in Iconography)

I think I'll write a separate blog on Herbert's Easter Wings. I feel that to regard the poem essentially as concrete poetry because it looks like wings is to neglect its aural quality, which is of intense emotional value and vital to its meaning,.

I'm always moving a bit left and right on these things... anything that is too prescriptive - i.e. "concrete poetry" - seems a narrow way. There's a wonderful fluency to Easter Wings, form & content, which I suppose is what I look for in all these forms: i.e. why choose that way? why choose that method? Edwin Morgan's The Computer's First Christmas Card is another good example. When these things separate, and its just about the form, I'm not so sure, its like Prynne or Olson, I feel there's been a barrier put between me and the poem.

Love to read your considerations of Herbert of course.

Had a chance to see this before I left, and I agree with you on all points. The problem for visual poetry-- including the current fad vispo-- is that it risks being decorative. Findlay is not just interested in formal noodling but has some things to say, and some profound ways to say it, via this medium. (Though someone told me that he was fascist in the 70s when it was sort of in fashion, but that doesnt interfere here.)

I must check on Finlay's possible fascism. But then so was Pound and Eliot had a streak of fascism in him.

The really interesting question is whether elements of fascism can be identified in art at all. Some think so, and sometimes they are persuasive; at other times, with other art it seems we'd have to strain quite hard to find such elements, and then be left wondering whether the straining had any point beyond instituting an inquisition.

You might enjoy the recent review by Mute, agrees with many of your points- http://www.metamute.org/en/content/upstairs_downstairs_from_intensity_to_entitlement