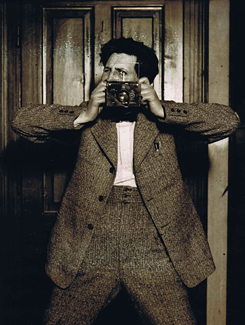 
Some excerpts from the forthcoming catalogue essay for Eyewitness: Hungarian Photography, at the Royal Academy, opening 30 June. I can't find the photograph I describe on the web. Just imagine it for now.

There is a marvellous photograph by Escher (1890-1966), The Horse of the Apocalypse (1937), not a typical work – if there is such a thing as a typical Escher – in which a large farm horse is being paraded at an agricultural fair. A great pile of cloud rises to a peak behind the horse. Behind the horse there appears to be a plain, or possibly a wide, high-fenced field. The man leading the horse is actually working hard to keep up with it, running it seems, to prevent the horse running away with him. He is formally dressed, in a three-piece suit and a homburg. He looks at us from under the brim of his hat with shaded eyes. His dark moustache lends him a magisterial air but his free hand is extended towards us in a gesture hard to interpret. Maybe he doesn’t want to be photographed. Maybe he is warning us to keep out of the way. And so we should, because the dark horse is extraordinarily powerful and its white noseband simply ephasises its power and darkness. It is clearly moving fast. Its mane is flowing and its right front paw is a blur, throwing up what seems to be a cloud of black smoke.

On one level it is an image of primordial energy only just under control, though we cannot be sure of the extent of that control. The horse is ageless, the man behind him is firmly fixed in time. The pile of cloud suggest approaching thunder, though it is chiefly the horse that is thundering for now. In less than two years an apocalyptic war will, we know, break out, though Escher cannot be presumed to know that. Everything about the picture though – proportion, focus, framing, and contrast, implies premonition, a dream image about to enter a crucial moment.

Most of the now famous photographers left Hungary after the [First World] war. They were not the only ones to go of course. John Lukács lists some forty well-known names in various fields: composers, musicians, mathematicians, philosophers, chemists, economists, psychoanalysts and many others. Five out of six Hungarian Nobel Prize winners were among them. All kinds of intellectuals emigrated, at least for a while, but the writers generally returned once it was safe to do so, however difficult life might be, because their business was with the Hungarian language.

The photographers did not return. Their language was international: they could take their Hungarian with them. There were those who needed to leave because of their political associations and others who left because the prospect of life outside an authoritarian proto-fascist state seemed more attractive. Given his revolutionary background, Escher somehow remained and survived.

Escher remained behind, unnoticed abroad, recording the entire field: Budapest, the poverty of the thirties, the paraphernalia and rituals of the Horthy regime, the soldiers of the equally disastrous Second World War, shooting portraits, scenes from theatre and funfairs, even exploring the gentle surrealism that Kertész so loved.

Anxiety, flight and isolation haunted them all. The love of realism and fine detail on the one hand, the flirting with surrealism and dream on the other: the bustle of the city versus the suspect idyll of the land; international high-style versus the residual Hungarian sensibility made them what they were. The alienated turning away into the observation of something that cannot be seen, the distant noise of a circus of sorts, and the thundering of the big apocalyptic horse are the ground bass of the music of what happened and went on happening.