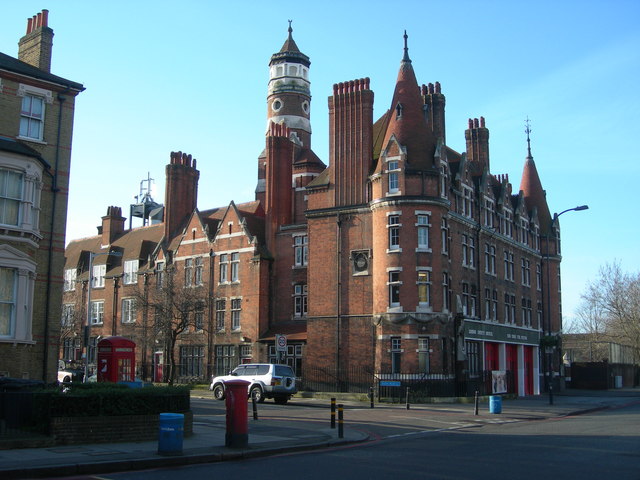 New Cross Fire Station, on the corner of Waller Road and Queen's Road.


The Victorian imagination has its wonderful wacky splendours. This fire station was opened in 1894. I was quite unaware of its existence until I went to a meeting in Waller Road today. The blend of darkness and uplift is perfectly tantalising and those chimneys, like a volley of gunfire, or the pipes of church organ, or an immense radiator, are so tall as to be almost meaningless ('almost' meaning too much meaning). The top of the turret is made for Rapunzel or the fire chief's infinitely extendable beard like some kind of safety shute. The look-out tower is nautical in its way. Perhaps all those verticals are emblems of leaping flames.

It is the overload of meaning that is so fascinating. It was the excess that Modernism wanted to sweep away. It was to be replaced - and was replaced - by the beauty of pure form, the beauty of the perfectly functional, by machines for living in - and, well, you could see why there was a desire for it. The desire is still there, clean-sheen pristine, an utterly finished simple grace shorn of association: the clarity of idea preferred over the clutter of the superabundant.

And yet there are those corners, those towering corners of a suggested bedlam of the overpopulated imagination. Such as this, one of Two Grotesques by Robert Graves:

Dr Newman with the crooked pince-nez
Had studied in Vienna and Chicago.
Chess was his only relaxation.
And Dr Newman remained unperturbed
By every nastier manifestation
Of pluto-democratic civilization;
All that was cranky, corny, ill-behaved,
Unnecessary, askew or orgiastic
Would creep unbidden to his side-door (hidden
Behind a poster in the Tube Station,
Nearly half-way up the moving stairs),
Push its way in, to squat there undisturbed
Among box-files and tubular steel-chairs.
He was once seen at the Philharmonic Hall
Noting the reactions of two patients,
With pronounced paranoiac tendencies,
To old Dutch music. He appeared to recall
A tin of lozenges in his breast-pocket,
Put his hand confidently in—
And drew out a black imp, or sooterkin,
Six inches long, with one ear upside-down,
Licking at a vanilla ice-cream comet—
Then put it back again with a slight frown.

What this place needs is more sooterkins. A whole brigade of them, lodged in New Cross Fire Station.

Completely agree. There is, for example, the tragic trashing of the Chiltern Street station. It's due to be an hotel, AFAIK. And is humanity better served thereby?

Just had a look at Chiltern Street, Anne. Looks like a close cousin of New Cross. The Romantic Utilitarian is a striking style. It would be nice if the question 'Is humanity better served thereby?" were asked more often in a wider context. I have grave doubts that it is. I suspect they talk of 'amenities' which is not quite the same thing.