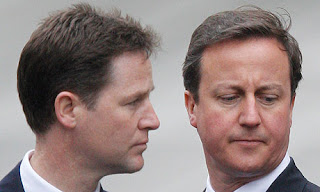 ...AV didn't win but the sheer possibility of voting on the process itself was welcome. It may also be that the No vote was tinged with a lingering desire to kick Nick Clegg, who will be black and blue by now. And not just that kind of blue. There's that nice line about the dreadful headmaster (Conk) in Martin Bell's 'Headmaster: Modern Style'.

So Dapper Dave goes free and Nick gets the vultures. But remember Noes, you voted for the two-party system ad infinitum, so now it's Dave for the term.

I can't personally see what else Nick 'emperor-of-pen-nibs' Clegg could have done at the time of the General Election. Not even Polly Toynbee can: all she really says is that he should have looked less happy about it. If the LibDems hadn't joined a coalition government the economy would have been sent sliding down the chute, all the way down to the bottom of the Irish bog. Labour had well and truly lost the election and the numbers would not have added up, so there was only the Tories. The gamble would have been - and might still be - that the worst of the crisis would be over by the time of the next election and then the Libbies might even take some of the credit.

I remember the outcry when the coalition was announced. I understand people being passionate in a cause, but lacking any reality sense is another matter.

And frankly, though I vote Labour on essential principle, it doesn't mean I have to like the actual party or its spokesfolk. The cries of Tory Cuts! immediately after the first emergency budget, might have sounded worse but been a great deal more honest as Bigger Tory Cuts than Labour Cuts, and for different reasons! That I would believe. Regression to mantras is the sure sign of the huckster.

I know. All very well to talk about realism but it is no more realistic to expect party spokesfolk to talk like honest human beings. OK, to borrow a catchphrase, I am just saying like.