The tribulations of Arsene 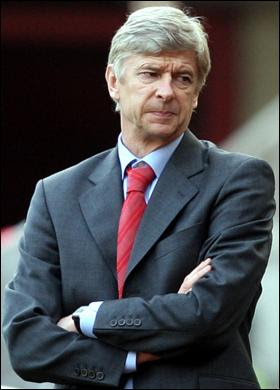 So it was 8-2. Eight! It was C who first looked for the result on the mobile phone while we were away yesterday. She showed it to me and asked if it said 3? No, it was eight. Eight is like a cricket team scoring seven hundred. It very rarely happens. United were excellent, as the highlights partly showed, but not utterly irresistible. They let in two goals and if Van Persie had scored with the penalty it would have been three. Or there might not have been eight. But eight it was. Yes, eight goals, each excellent in its own way.

So now it's crisis Arsenal. While I always had the deepest respect for Wenger's teams, admiring the style of football he got them to play - the closest thing we had to 'the beautiful game' - I have never quite grown to like him. It was the prissiness that slightly repelled me - the tremble of those thin lips, the natural assumption of superiority (one of life's self-made aristocrats, I thought) and the tendency to whine at any bruising tackle by the opposition, as if to say: How dare you filth mess with my objets d'art!

Like all managers (yes, bless you Sir Alex) he was paranoid and like all managers he was a hypocrite in failing to notice any depredations by his own side. But a capacity for paranoia and hypocrisy have long been managerial requirements in football. Demonstrations of both are expected, and in the nervous fury of the modern game and straight after it, it is hardly fair to ask for objectivity. Who, after all, is interested in objectivity when you can have drama instead?

But of course he was, and probably still is, a terrific manager, a genuine thinker and aesthete who rightly thought that- given certain conditions, which in his case would include a free hand in the upbringing of his footballing children and a degree of protection from the journeyman-cloggers of the world - it was possible to win with beauty. Barcelona have in fact proved his case for him, but under different conditions.

His teams were often French in composition and style which is no bad thing in itself but less effective, as countless others have pointed out, in December mud at Stoke, Bolton, or even Old Trafford. Especially at Old Trafford. It did work for a while when he had fierce defenders at his disposal, some of them inherited from earlier teams. He needed a genius or two, a Bergkamp, a Henry, an in-form Ljunberg, a youthful Pires, plus a tough Vieira, a Keown, a Petit, a Campbell, a Cole and Fabregas with Lehmann in goal. There were matches in which there was no British player in the team. Arsenal could win by simply bedazzling the opposition.

It's sad to see him now He looks like a man wrung out by circumstance and his own decisions. As a human study there will be few better illustrated documents of distress. He desperately needs some luck. And some help. Though I suspect he is not a man who welcomes help.

Oh, and the goals. I am of a sensitive disposition and understand how Wenger must feel, so I won't make the video too big:

But then I can't not have it!

It's been a while since I last commented here. I'm more of a quiet observer (some would say "lurker"), but I'm also a Gooner (since 1993).
Obviously I was absolutely devastated and gutted - still am. Plus furious, humiliated and the lot. First I blamed van Persie for missing the penalty 1-0 down. During the game I mostly blamed Traore and Jenkinson, but then realised the former hadn't played a competitive game for Arsenal for 15 months, while the latter had his PL debut that day. Poor kids, I thought. Then one commentator remarked that the average age of MU's starting lign-up was lower than ours (c.f. Alan Hansen). No excuses. Yes, we have countless injured players, but also some missing through suspension. Once again, no excuses.
As for Wenger, I admire his instinct to find rough dimonds, then the way he develops them, his sporting values, and so on. But then again over the years he has made some idiotic tactical mistakes, and now it has become clear as daylight that he has also made a series of strategic errors. And that's really bad! Two years ago he would have had a similar squad as today's for a Carling Cup tie, but now he's starting an entire season with a bunch of kindergarten toddlers. My predictions are we'll drop out of the Champ's League into the EL, and with considerable luck finish 6th to 8th in the PL. Or something inexplicable and miraculous happens. One hopes.
And before I forget: respect to Sir Alex. Normally he would have been jumping up and down after every goal. On Sunday he just sat in his seat controlling his emotions following the fifth nail in our coffin. You could feel his empathy towards his counterpart in the other dug-out. Nice gesture.

I do wonder whether Arsene's current on-the-pitch woes aren't down to him becoming ever more wedded to his own footballing tastes? More Pires, less Viera and Campbell, year by year. Arsenal don't fight at the moment: under Wenger, they always had fight - until Viera left.

Then there's the relative decline in French football. Wenger had an advantage in knowing the market there that is an advantage no more. I don't believe that modern scouting means that everyone knows about every potential player - United's reach into Brazil far outstrips Chelsea's for instance - although you often hear that claim these days. Arsenal can't find the youngsters they once did.

It was always the case that money could peel players off Arsenal in a way it couldn't peel them off Manchester United - Anelka has since played at Liverpool and even Bolton. But it's replacing them that becomes the problem.

It's almost as if Arsenal are what West Ham was ten years ago - a breeder club whose product would then go on to richer climes (Lampard, Cole, Defoe, Carrick and the rest).

Or there's another scenario, which involves us all looking jolly silly at the end of a glittering Champions League Final won by an Oxlade-Chamberlain hat-trick. But I doubt it.

I was terribly upset that Man U won, and found myself getting really angry at Ferguson, for being such a smug git and patronizing b******. My boyfriend had to restrain me from launching into a physical assault against the Mancunian Man U fan barmaid in one of our local pubs, who got on my tits by rubbing it in immediately after the defeat of our brave lads, by smirking as she was taking the drinks order. I had to limit myself to a foulmouthed tirade.


*if there isn't one there blinking well should be.

Chanez, you'll have to make a date to launch a physical assault on me too. It is hard not to feel a bit smug after an 8-2 win against Arsenal. I'n not sure Gooners would have been full of sage humility or entirely without the desire to smirk had the scores been reversed. But are you still in full support of Arsene? (I'd certainly give him till the end of the season and look out for signs of revival).

Good point about French football, P Lane Anon. Is that a blip or a longer term decline? Arsene's version of Frenchness is the sort I can imagine being played by Kenneth Williams (Infamy! Infamy! I can hear hear him cry, Ecrasez l'infamy!). The Alex Ferguson, as played by Sid James, comes along, and fetches him one on the hooter.

You can tell I am feeling a little facetious after the result. I would actually prefer Wenger to succeed just enough to make a good fight of it every year.

I thought Blackburn were a touch unlucky, Gwilym. But I doubt whether Kean will last much longer. There is a tribe of men who never quite look like making it in football management: Glenn Roeder, Gareth Southgate, Paul Jewell.. And I can just see Kean's name being entered on that list.

"The Alex Ferguson, as played by Sid James, comes along, and fetches him one on the hooter."

There's a lot in that, actually: it's the way Wenger allows himself to be bullied by other managers. There was a period c. 2004-5 when Ferguson and Mourinho seemed to acting as an evil kind of tag team, taking it in turns to wind the poor man up.

It's not that Wenger isn't tough enough for this world - not after c.14 years at Highbury/Emirates. But not as tough as some others, and they've been able to play upon that.

I remember the way players for other teams trusted Mourinho to beat them far more than they trusted their own man to come up with something. Arsenal's players looked at Ferguson like that at the weekend: it might now be a matter of how many other managers in the division have the same effect.

The French example is an odd one: they've done everything that we constantly urge the FA and SFA to do, and at first it came up with the goods in the most astonishing fashion. They still produce good young players: but they aren't better than Spain's, and - after 1998 and 2000 - I think people know to check out the French youth sides now. Wenger knew this was coming before anyone else and could capitalize.

To his credit, he also saw the current crop of young English players coming through, and described them as the first generation whose skills were the equivalent of their continental peers. On the showing so far, he's not wrong.

I love the idea of the evil Ferguson-Mourinho tag team. Like Giant Haystacks and Big Daddy, say, against Wayne Sleep. Wenger wasn't entirely free of bullying tactics himelf. I well remember Pizzagate and the baiting of Ruud van Nistelrooy, And Ferguson's teams have never played like Big Daddy. It was never all weight and grunt. United have played their share of the beautiful game. Maybe with a touch more zip and exhilaration at times,

And Balint - I think 5th or 6th is quite possible. The trouble is Manchester City and Chelsea's spending, not to mention a likely Liverpool revival (more spending).

Ferguson and Wenger generally agree that it is better to spend less on developing players than a fortune on world stars. I would support that myself. The marquee buy always seems an act of desperation. Cristiano Ronaldo wasn't a world star when he came to United, nor was Thierry Henry at the time Wenger signed him. He had just had a bad season at Juventus.

Dreaming, I'd love to see Cantona take over at Man U and lead them out against Wenger's Goonars.
Then I'd like to see Giggs take over at BRFC. He could do it! He's not too young.