Image in a white shirt 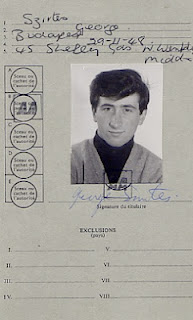 Budapest ID photo from 1968, our only return visit as a family

Today Derek Adams came over to photograph me. His offer to do so came out of something I had said on the net about the photograph as a way of investigating the spirit. What I had written was: No photograph looks absolutely like you until you die: then they all do. Derek responded to that and a few other such little notes by suggesting a photograph and I said: yes.

My note simply reflected on the fact that while we are alive we are in motion and that this or that moment of absolute stillness runs counter not only to our experience of life but also to other people's experience of us. But once we are dead we no longer move. We are still. We have vanished. Now only the photographs remain; they are our final stillness. It is perhaps one of the reasons we like to look our 'best' in photos. If that is all that remains of our appearance it had better be good.

But why do we bother? We won't be there to care.

Perhaps the wish echoes that of our mothers in youth that we should wear clean underwear in case we get run over by a car. Or our own wish that our senile toothless old age should not be the image of us that those we care for - or indeed anyone - carry away with them. This, you must understand, is not us.

Our sense of presentability is something we wear under the skin. I don't mean we want to look false or overpreened, just that we want control of the way we are perceived. That control may involve being 'unpresentable' if that is the way we have grown used to presenting ourselves. There is a pride in not 'letting ourselves go' - the phrase itself a clue that we prefer to maintain a hold on our selves, the selves facing the world, that is.

So Derek arrives at the time discussed. I hop into his car to help him find a parking space, which we do further down the street, and I help him carry his equipment back to the house. The natural light is best in the upstairs kitchen, so we move the table and I make him coffee as he prepares his white backscreen, a couple of circular reflectors, a mirror, the tripod, the camera and various lenses. His series of photographs of poets is entirely in black and white against a white background. Knowing this I decide to wear a white shirt. The idea, presumably, is that it is only the face the viewer really sees, the face without distractions. He puts a chair in front of the screen and I sit on it.

Derek is a professional photographer of long standing so he knows it is good to engage the subject in conversation. But I am deeply self-conscious and know I am. He talks and I talk back but the camera is right in front of me. I am self-conscious because I have no confidence in my appearance. I myself do not know what it is. It is constantly running away from me. I would like to be able to handle it, as sheer phenomenon if nothing else, but I can't. I have no handle on it.

He takes over a hundred pictures and I do relax some way, but never completely. I am wary of my own image. Maybe that wariness is an aspect of my spirit. I suspect it is. I wonder whether that wariness will show. Perhaps it should.

It's about an hour and a half's work, then I put out some lunch and we talk a little more. He is due to give a reading himself in Southend tonight and has to get home and make dinner for his wife who is out at work.

I didn't get to see more than a few of the photos on his viewfinder as Derek flashed them before me. Yes, that is distinctly me, I thought, the me that often appears in photographs, those with presentable selves.

And yet, it is as if I were suspended in aspic.

I note myself in the aspic, that strange jelloid space, my transparent coffin. It is like seeing photographs of my parents in relative youth. They are both dead now. At some point I too will be, and these new photographs will then be older, confirming, magisterial. And somebody will say: He was something like that, though he is posing.

But they might add: And yet that is him as he was too because there will be something, maybe just in the eyes, where what everyone regards as spirit still resides. Behind the theatrical mask, the eyes, the eyes that are full of time - time that is always shutting down, every night, every hour, every moment - those eyes right there will appear to be overflowing with time, leaking time, spilling it, from this picture with its natural light, its white screen, reflectors, mirror, chair and white shirt.

what got me was looking at a photo of my folks on their honeymoon, and realizing i was now older than they were when it was taken...then you know time is a jet plane...

and that's a very 1968 mugshot if ever there was one

This makes me think of the Native Americans who originally would not allow their pictures to be taken fearing the photograph captured their soul, preventing them from moving on to join their ancestors at death. Perhaps when they looked at those first daguerreotypes they recognized their souls deep within the eyes of these familiar strangers. I have to wonder now if their initial wariness, perhaps echoed in your wariness and mine, was not truly, upon reflection, wisdom.

I wonder how far the Native Americans would have recognised themselves from angles other thatn they saw reflected. We have a certain concept of our appearance in spatial terms that a Native American might not have had. It would have been a haunting experience. The other Native American story - it might be in Gombrich - is that they objected to being painted in three-quarter view because their faces appeared to be reduced. But it may be best to be a little wary of such stories. Which Native American tribe was it? How representative? etc.

I was just 19 at the time of that photo, Liam.Perhaps these aggregate images of us work their way towards a composite mean that might be our sense of ourselves. My father did say a few times that it was a surprise to him being seventy, eighty and so on. It wasn't what he felt he was.

I am linking to a lovely blog post by poet Magda Kapa which refers to this one of my own.

There is still more to be written on this - partly in terms of reassurance, value, vanity, self-definition, self-regulation. I'll do that.