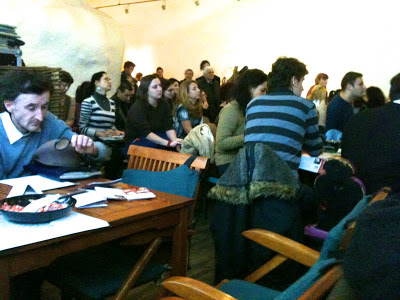 I still have this nuisance of a cold and a flight doesn't help. The plane was packed solid with no room for my cabin luggage or coat above so I had to keep them at my feet. In front of me a man was talking to two blonde women with the intensity of someone who has to hold the floor and to be giving out information all the time. He'd have driven me mad. There was an hour of conversation about dogs, then towards the end about half an hour on learning to fly small planes. He knew everything, an alpha male in his small orbit. I wondered whether they were together and so they turned out to be.

My pick up, Vasile, was ready and waiting at the airport. His English is minimal and my Romanian is non-existent. We drove from the ragged outskirts into the more majestic centre of Bucharest, some of it looking vaguely familiar. It is my fourth visit here but each time it has been either for just one night or even less, until the buses arrived to take us down to Neptun on the Black Sea. That is over now, those Days and Nights of Poetry having lost funding, and this Bucharest Festival has taken its place in the last five years.

The British contingent included Will Self, Jonathan Coe, Andrew Cowan, Kei Miller and myself but by the time I arrived Self and Coe had done their - very successful - event and were gone. Andrew - a colleague at UEA - was however here and we met at the hotel desk.

The hotel itself is very good, better than the usual. The room spacious, well-equipeed and free WiFi without passwords. But I was tired. I showered, unpacked and lay down, but only for about an hour because we were due to be taken, by organiser Ioana Gruenwald,  to the evening event, featuring Andrew, Hungarians Sándor Zsigmond Papp, Mátyás Dunajcsik and Romanian Mihály Mateius.

The venue is a club with tables, a bar and a raised stage. It was rapidly filling up almost entirely with young people of student age, many smoking. It was like being back, in the best possible sense, in the 70s or 80s. Bogdan-Alexandru Stanescu who invited me was there as well as another of the quartet of organisers, Oana Boca. I was feeling rather ill and was shown to a table with Englsh speaking literary agents and publishers, in fact Andrew's agent. I was feeling ill and immediately upset the remnants of a bottle of beer.

The event moved in and out of focus for me, but chiefly it was very good. Each writer read for ten minutes (well, a little longer) three in English, though SZP, who spoke Hungarian, had his story read for him by MD, whose English is excellent. I couldn't understand MM who read in Romanian, but when abroad you must expect not to understand everything. After the readings came questions from Nadine Vladescu who conducted the whole in both Romanian and English. Nadine is one of that group of beautiful dark haired women in whom Romania is so very rich but she also writes for literary papers and had already done an interview with AC, who had arrived the day before.

It was very dreamlike, very clublike, more like an art college affair than a respectable UK festival with its rank of grey and middle-aged. This reflects very well on Romanian culture, or at least on the ambience of this festival. Despite my cold I enjoyed it.

Then we hung about before going off for supper, about fourteen of us. The time between ordering and serving was about an hour and a half, but it was good and there was a lot of conversation. I probably succeeded in giving my cold to the agent Simona K, and talked Hungary and Hungarian books with MD, then Anca Fronescu came in and we talked travel and Amsterdam where she lives.

The food eventually came and about 11:30 I began to feel at the end of my reserves of energy and asked for a taxi. AC came with me. As for the night - another broken one with some sleep at the end.

I like Bucharest more each time. Some of its downtrodden, feral quality has vanished with the passage of time though not entirely. It feels like a proper city, different enough not to be Western European, but not so different as to be unrecognisable. Bauhaus building, 19th century classicism and baroque, big broad streets, a slightly chaotic traffic with cars cutting each other up without too much neurotic honking (a little like Delhi in that respect).

There is something passionate about its intellectual life, enthusiastic, hungry, generous. It is on the whole warmer emotionally than Budapest, which is a city floating on a sea of  half-restrained irony. Not so here, not the sense I have of it.  No city is without irony, of course, but Bucharest lets its guard down rather more.

Today I have interviews and my own reading with Mircea Dinescu, Daniel Boyacioglu (who is in fact Swedish) and Kei Miller. Then a round table discussion as last night, I imagine.

I'm glad things went well and that you get over your cold soon! I like your comments about Bucharest. It certainly fascinated me when I was there. It had a strange seductive beauty combined with a somewhat postapocalyptic feel... Definitely both darkness and warmth(not literally - I went in January!). It had many hidden wonders, too. And the people we met briefly seemed a bit guarded and a bit sad, but friendly.