The nine-day day and the drifter 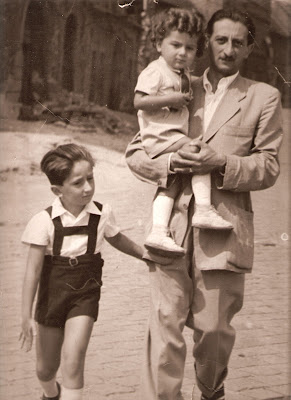 My father with my brother in his arms, me beside him, Budapest 1955/6?


The midnight-mass bells have just stopped ringing in the abbey. The service has begun. The period between Christmas Eve and the New Year  has entered on its long extended day, a nine-day day in which life switches over and enters a new conceptual space.

It is a complex space: the nine days mark time more than birthdays do because they encompasses more than the personal. This great long day is in itself an emblem of world-time passing, an emblem of mortality. That is why Christmas deaths are so much more striking than normal deaths. At this time one should be switching gears not stalling for ever.

It is only now I truly realise that I am sixty-four. I don't think I realised it on my birthday which was an ordinary working day ending with a supper.  There is nothing special about the personal and particular days that mark our personal births: it is now, at the beginning of this nine-day period, this single slow-motion day, when the clock judders and wheezes, that the fact is driven home

I myself have been wheezing tonight, with a mild asthmatic cough, one I have had for several years though not every year - not last year for example. It tends to follow a sustained cold for some reason and makes conversation difficult because of the constant coughing and the pressure on the lungs. I can't remember when the cough first appeared. Maybe ten years ago, maybe more.

Well, that was then. In other respects I feel no different now from when I was in my twenties or thirties. Psychologically I don't think I am much older: wiser perhaps, at least I hope so, in the sense of being more genned up and generally cooler about things, but the mind itself feels the same, in the same essential condition.

That is perhaps the case with men more than women. Women have more distinct landmarks: the onset of menstruation, the loss of virginity, the first child, the leaving of the child, the menopause, and beside that, all the baggage of beauty in first flower that passes more clearly than it generally passes in men.  Older women can be beautiful of course - I know a good many that are - and am married to one who looks nothing like her years and still has all her girlish beauty about her.

Boys and men slide from one station to the next and, in an age without much ritual, simply find themselves in this or that position without any major intrinsic life marker. School, univerity, degrees and jobs - if that happens to be the pattern - are all extrinsic. Even fatherhood just happens, momentous as it is. It is a momentous event that happens to someone else and arrives at your door suddenly, not as a result of your labour. No wonder that one of the favourite male identification figures, in both books and films, is the drifter who blows into one place after another. Most men - and I include myself - have simply blown in. In that respect I feel very young, as if nothing has changed.

I remember my father saying that he could not believe the age he was. It seemed funny then - he was always older than I was, and was always going to be. From my point of view he was conceptually 'old' from the start. Not so to himself, of course.

And yet I suspect - in him as in myself - that one part of the mind has always been aware, ever since manhood anyway, of a shadow form of old age, a figure that runs parallel with us from the time we enter marriage.

The result is that it is all rather dreamlike. Part of us remains a boy because nothing intrinsic has changed to tell us otherwise. So boy, man and elder run along together as part of a single dream being, a triple existence that runs on its own fuel. (I myself run up stairs, I can dance a good while without my heel touching the ground very often.) It feels like an all-but-eternal condition.

But of course it isn't. And that elder: doesn't he look fearfully like an old fool, a dotard, the old dotard who entered marriage and fatherhood with us, and who was conceptually 'old' to his children from the very start?

Ours is a tragi-comic, potentially productive condition. The dreams rampage on while the body, little by little, in small sharp steps, descends. But we still run up those steps and need to, even if they kill us at the end. As they surely will.

So very true. Beautiful and profound, George. Thank you. When I was twenty or so, a friend of my family retired from his architectural profession. He had always been an inspiration for me. I asked him, what it felt like to be 65 and ending his career. He replied that he was still a boy my age, that despite his physical condition, nothing inside changed. It scared the hell out of me. Hell, it still does. Your point about the drifting from one status to another is well-made. We need more rites of passage.

Thank you for the comments. The rites of passage have certainly gone missing, Anthony, though some Americans like Robert Bly in Iron John have tried to put them back. But I don't think they will quite go back, not the way they were unless we have a technological disaster.

I don't mind the drifting state myself. It is, if nothing else, a definition of some sort, not unheroic in its way. Somewhere between Peter Pan, Han Solo and Clint Eastwood is a possible if much simplified myth figure. Both men and women need myths to refer to but most male myths have been diminished or declared redundant. These remain and are, I think, more than workable. It is where many men find themselves now at any rate.