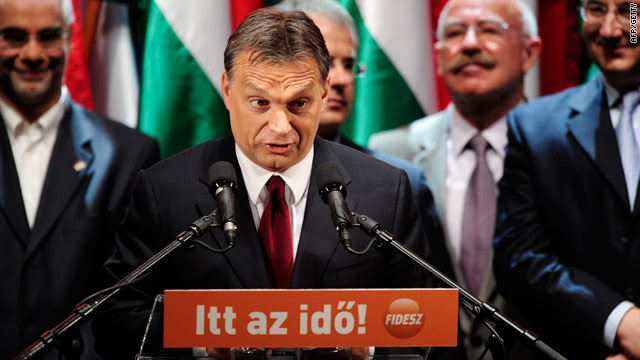 Why are you so concerned about the current Hungarian government's cultural policy?

Ever since the landslide election of Fidesz in 2010 - a landslide brought about by very particular circumstances - the government has been looking to impose itself and its view of what it considers to be 'the nation' on not only the political sphere but the cultural too. In effect it wants to return the country to the condition of the thirties. In practical terms this has meant appointing its own supporters, and in some cases figures well to the right of its own floating supporters, to positions of enduring power, replacing what it considers to be corrupting internationalist 'anti-Hungarian' elements.

So theatre directors have been replaced, others hounded, oppositionist radio stations and publishers and writers' organisations have been squeezed, the funding of arts organisations reduced and their control assigned to right wing, sometimes ultra right wing figures. The education system is now told to teach ex-fascist authors of the last war, statues of Admiral Horthy have been springing up, a major competition and exhibition of the new rather farcical nationalist art was organised, extolling the virtues of the Horthy period. Major philosophers have been smeared with trumped-up charges.

It is a dangerous attempt to turn back the clock by force and to ensure that it stays turned back. The atmosphere is full of hatred.

Much of the international focus is on the antisemitic antics of the Jobbik ultrarightists in Hungary. Are they the most serious threat to Hungarian democracy, or do you see the popularity of Fidesz as more signficant?

Jobbik are a threat. They are the third biggest party in parliament and are well supported in some places. Their behaviour in parliament - fiercely anti-Semitic, anti-Roma - is tolerated by the Fidesz government. Their uniformed units terrorise Roma in villages. They are a potential army - in fact elements of them had been militarised then banned, but they are ready to be militarised again. They model themselves on the wartime Arrow Cross that murdered so many people in the last year of the war.

The problem is the relationship between the Fidesz government and Jobbik. They depend on each other. The right wing of Fidesz is pretty close to Jobbik. They might not express themselves in quite the same way, but they look to effect similar changes.Using its powers to change the constitution, Fidesz has so extensively manipulated the political system that it is going to be very hard to vote them out of power, and, even if - unlikely as it seems - they were voted out of power they have changed the terms of service of Hungary's equivalent of the civil service so that their own, new appointees could in practice stop any changes a new government might propose.

Although nominally opposed to each other, Fidesz is creating the proto-fascist conditions that Jobbik (who deny they are fascist) actually embody. The opposition is disunited and excluded.

How would you answer the charge made by Mr Schopflin in the LSE debate that critics of the government, such as yourself, are leftists without a constituency in Hungary, who are badmouthing the nation abroad, and perpetuating a stereotype, congenial to Western Europeans, that Hungarians are barbarians from the East?

Mr Schöpflin really doesn't have a leg to stand on. In our debate at the LSE he gave no response at all to a long series of quite specific criticisms (see  blog), but along with the Hungarian Minister of State for Government Communication, insisted on a martyrology where the left-leaning press of Europe (including The Telegraph, The Financial Times and The Spectator) had a 'narrative' - a word much used by the minister - that was the product of such bad-mouthing. That was the only argument.

This is nonsense. Nor is it only outsiders 'without a constituency in Hungary' who are responsible for this 'bad-mouthing': there are strong opposition voices in Hungary, people who actually live there. It is just that they are being ignored, excluded, and legally locked-out. They are told they are not 'real' Hungarians, in effect not a part of the real Volk.

Essentially Schöpflin is peddling the big lie, in the hope of garnering the votes of 'patriotic' Hungarians. Those votes are based on long-established historical conditions and reflexes which is what makes them so dangerous.