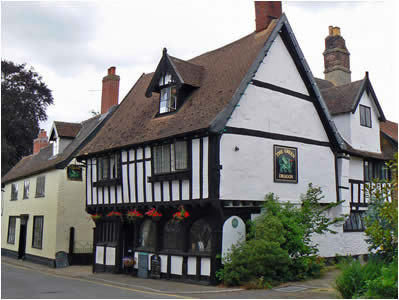 Well it's a pretty place. Richard Hogwart of The Guardian writes of it, saying:

There are joys to cling to. The other day, going to visit my own parents, I stopped in the market town of Wymondham, Norfolk, three miles from their care home. A friend of mine lives in the town, which is lovely. There are winding old streets, a market cross, and the superb Wymondham Abbey, which was started in the 12th century and is staffed exclusively by very nice people.

Bill Bryson lives nearby, and he could live anywhere at all. We had lunch in the Green Dragon pub. It was one of those sunny but freezing days, so the wood-fired stove in the snug was quite as welcome as the real ale.

It is true. There are five pubs near us in Wymondham. The Green Dragon above - the nearest - is the Hobbiton model. Tiny. You practically have to sit in the fire rather than near it. Elsewhere we have the Agatha Christie model and the American Werewolf in Norfolk model.

As for Mr Bryson, we once sat next to him at the local Thai, so he is around.

On Friday and Saturday nights the young hang around doorways and the market cross with little to do. The Kurdish kebab shop does good trade at that time. Every so often a boy racer rips down the street at sixty. The Chinese takeaway is pure Edward Hopper. Two chippies. We are a mixed population, local, indigenous and poor, plus middle-class, educated and commuting. A few bohos, probably including us. The full pastoral. The Dog Beneath the Skin 2008.

Cracow and Frankfurt seem like a dream now. Cracow feels very clear but Frankfurt is a set of locations in light rain. This is the Herbert poem I chiefly talked about in Cracow, suggesting that when it first appeared in England we were all Hamlets requiring a Fortinbras to bury us.

Elegy of Fortinbras
for C.M.


(translated from the Polish by Czeslaw Milosz)

The argument modulated from here into one about Herbert's mystical dry-eyed stoicism regarding stones, pebbles, chairs and other inanimate objects. I may put up bits of the paper here.

The word choices of Milosz and Scott are so particular and wonderful that one doesn't feel that one is "looking at a tapestry from the back" and, as such interesting translations can do, the translation makes one also wish to have a great command of the language of the original.

Are there any other translations of this that you've had recommended to you?

Can't find your Uncle Gabriel. Not drowning his sorrows in the pub by any chance?
Cluj 1 - Bordeaux 2

Uncle Gabriel? Sulks in his castle. Brings down the coffin lid and sulks.

Better set the alarm then. The Romans will soon coming!
By the way after the relative success of my poetry book, winning small press individual collection of the year title and so on, I have been wondering what to write next. Possibly even a change of genre.
This morning I was raking some fallen leaves when a woman walked by. She looked aggrieved. Even bitter. I tuned-in to overhear a piece of her mobile phone chitchat. It went something like this:
"...Florida...99% Jewish...99% Jewish....Florida...the father is Kenyan...the mother is a Jew..."
So now I have it. My next book will be titled something like 'An Austrian Mentality' An exposé no less. Ole´!