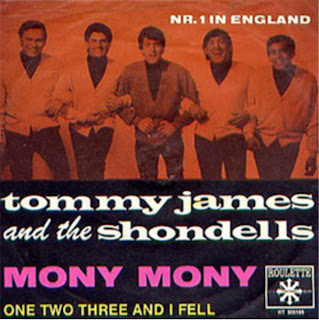 When Mony Mony starts up the room stops
whatever it’s doing and begins to frame
something it needs to say. The music is a game
it learns then forgets. The temperature drops
inside it as if time were running backwards
to where Tommy James falls through a trapdoor
of memory and disappears through floor after floor
till he ends up here with these notes and these words.
The Shondells tremble with electricity. The drums
generate entire bodies in the dark
holding a grey diffuse space and charging all
of it. Here she comes now. Here is the spark
that passes between them. Here are the magical
ingredients: death, fury, yearning. Here she comes.

That idea of sonnets about peripheral popular music. Maybe more to come. This is a draft

For my generation of Americans, there's one band guaranteed to do this to a room: Talking Heads. Prince is a pretty good bet, too.

You're right, Andrew. I'm giving Tommy James a lot of credit here. Mind you, Mony Mony is a terrific song and that video on my Sunday blog sends shivers up me.

And you're perfectly right on Talking Heads too. Possibly the most fully intelligent yet exciting band in my post-teens time. Odd to say 'yet' but pop + intelligence seem something different from excitement. It's the visceral energy that does it in the end and Talking Heads had that too.

Never been quite a Prince fan or listener. My kids were great admirers. Maybe I thought he was theirs in a way I never did with Talking Heads.

I'm definitely more a T. Heads man than a Prince man, but I've seen rooms of people my age explode into dancing when Prince comes on. :-)

Until they started incorporating all the Afropop rhythms into their music, they had a principle of moving as little as possible on stage. When asked why they had started to dance (against that principle), David Byrne said that the music had just gotten so infectious that they had to dance. So when you see them dancing to their own music in "Stop Making Sense," you know they are dancing because they love what they are hearing!

I've recently had the experience of discovering a musical guru who's younger than me for the first time: Conor Oberst of Bright Eyes. Nice to know that (barring bad luck or Cobain-like stupidity on his part) he'll be around at least as long as I will, so I can be entertained by new stuff from him for the rest of my life!

I've had Talking Heads up here before a while ago. Burning Down the House is pretty good and their take on Take Me to The River is excellent.

Here's my all-time fave band doing "Take Me To The River" ...

Nice. I'll swap you on that (while keeping mine)