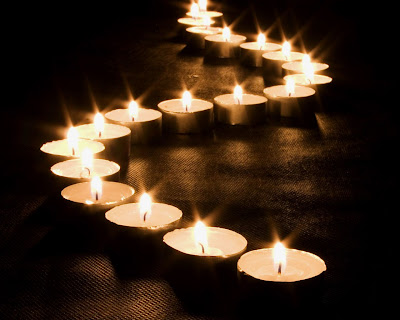 Of Mice and Jackdaws: Storytelling by Candlelight 19:00-20:30 Arts Centre
with Elspeth Barker, Padrika Tarrant and Ceinwen Thomas on Welsh Harp

A great, dark and funny novelist and a genius of the haunting, tender and grotesque see us end the festival by candlelight.

Elspeth Barker's is a wholly original literary voice. O Caledonia, first published 20 years ago, reads as freshly now as then. Steeped in classical allusions, rich in Scottish – and natural – history, fantastical in its highly wrought characters, this coming-of-age-novella is as passionately intense as it is wittily acerbic.

It opens, seemingly, with a murder and a suicide. Beneath the great stone staircase of Auchnasaugh and the leaded stained glass window emblazoned with the family motto Moriens sed Invictus, "Janet was found, oddly attired in her mother's black lace evening dress, twisted and slumped in bloody, murderous death." Her death is followed by that of the tame jackdaw, which "like a tiny kamikaze pilot... flew straight into the massive walls of Auchnasaugh and killed himself". - Amanda Hopkinson, The Independent

In The Knife Drawer , dead bodies miraculously vanish as if scraped to nothing by pudding spoons. Marie's mother has rather lost her wits since she did away with her husband. She could swear they're out to get her; even the house gets messy on purpose, all by itself. A careless wish, made against a rainy morning seems to have conjured the grandmother into being; she is part guardian, part bad fairy. She is also sometimes an owl. Marie's twin is living in a hole in the back-garden, small and round as a cherry pip, waiting to be discovered. Marie is a gentle soul and tries to do her best for her strange ragtag household, but all the love in the world can't hold back an avalanche. - Love Reading

And so the festival closes closes with candles. Next the reviews.