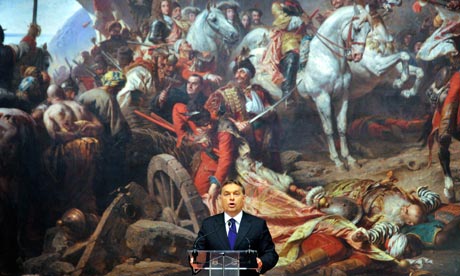 I'm glad to see this story running and staying big, thanks here to The Guardian's Helen Pidd:

Surrounded by half-drunk flasks of tea and bundled up in three pairs of trousers apiece, the hunger strikers entered their 26th night of protest outside the Hungarian state broadcaster on Wednesday evening. Temperatures were hovering around freezing and icy rain had started to spit. But it had been much worse, said Balazs Nagy Navarro. "At least they have turned the music off now," he said, pointing to a sandbox suspended from an upstairs window.

Inside the box was a speaker that for "five or six days solid" around Christmas had blasted Jingle Bells at top volume. It wasn't the only eviction tactic. Behind the glass of the MTVA reception area were reflectors that had been used to try to dazzle the protesters outside and prevent photographers from getting a good picture when private security guards came – and failed – to clear the camp....

...While ordinary Hungarians worry most about what will happen to that mortgage they took out in Swiss francs, for many foreign observers the new constitution is the source of most anguish. It came into effect on 1 January, and, combined with at least 350 laws that have been rushed through during Fidesz's 20 months in power, has, say critics, all but removed checks and balances to the power of the government and ruling party. The independence of the central bank has been compromised and Fidesz loyalists now head powerful councils overseeing the media, the judiciary and budget. There have been crackdowns on Roma rights, and funds for education and social care have been shredded, campaigners say.

Some of the world's most powerful people and institutions have also had enough. On Thursday, a spokesman for the European Union confirmed that without a promise from Hungary that some laws would be changed or repealed, neither the EU nor the International Monetary Fund would even discuss giving it the multibillion-euro bailout even Orbán knows it needs (though he calls it an "insurance contract"). EU lawyers are going through the latest legislation with a fine-tooth comb and will soon pronounce on whether it is incompatible with European law....

...Economists believe Orbán has no choice but to promise to repeal laws in return for the €15-50bn he needs to borrow to repay an earlier loan the IMF granted last time the country was bailed out, in 2008. The Hungarian government is now having enormous problems borrowing money after two ratings agencies declared its bonds to be "trash" at the end of last year. Couple that with the fact that the value of the forint is falling off a cliff, and you have the makings of a particularly toxic crisis.

My friend in Hungary, who has attended the demonstrations, talked about the difficulty of overcoming the noise and the bright lights. I understood her to mean this but wasn't sure. Now it is clear. 'If you can't beat them or shoot them, deafen them with Jingle Bells played ad inf.' I think it was the US blasting trash metal that did for Noriega. I'm not sure which is worse.

In any case, the story is not going to go away. I'll insert pieces as and when there's something new.

I trust the Leader (I think it's time to start calling him 'the Leader' for he is showing many of the attributes required for his role of destiny) will not be leading his so-called followers into any fals flag operations and cross border skirmishes. I was recently talking to a young lady on a flight from the UK to Bratislava who was worried by the situation. She said that she is thinking of moving from the border with Hungary to live with her mother in the north of Slovakia. Leaders often use false flag operations to divert attention from real problems at home. A currency reduced to Junk Status for example.

There is always a danger of that since he gave the vote to ethnic Hungarians over the border. Interesting for the neighbouring states too.

It sounds horrendous. See also this article about Orbán's Kulturkampf in yesterday's Indy, who ran a leader on the subject as well.

Thank for that, Anne. I missed that. That can go in here, as well as on FB and Twitter. And thank you for the congrats the post below this one.

It seems that from the dark days of the Soviet era, from which you and your family fled, George, the Hungarians are still experiencing the pain of facing the light. It is easier, after all, to burrow into the nest of extremist nationalism, or of communism, than to examine and embrace the truth of a universalist approach such as yours!