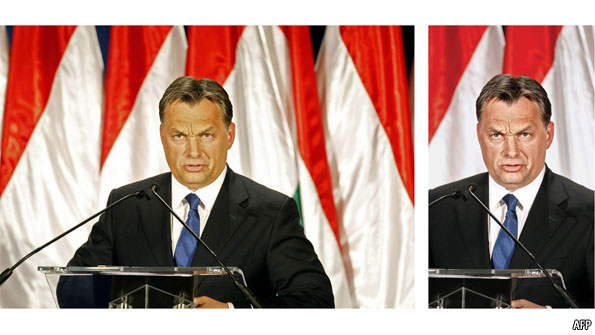 
Unfortunately, there are too many things which are more outrageous and will have graver consequences than the case of the HQ [Hungarian Quarterly]. One is the large-scale dismantling of public collections - museums, monument protection, archeological sites - by hair-raising cuts and cynical reorganizations, and in the spirit of crudely nationalistic ideas. "Heroes, Kings and Saints" is the title of the new exhibiton at the National Gallery, mounted in a style as if time had stopped in the 1860s, and coupled with the show of paintings specially ordered by Orban to celebrate the new constitution.

The Uj Szinhaz story - [The New Theatre directorship I mentioned before] - is the tip of the iceberg with the theatres - at the provincial ones the old directors have all been sacked, and for Budapest there is the time-honoured method of not giving money to the fringe theatres and the ensembles they do not like.

Another, even more injurious case is the new law on higher education, which drastically reduces the number of entering university students and couples it with the introduction of exorbitant tuition fees.

In the meantime, for light relief, there is always this from The Economist:

Yesterday Hír TV, a Hungarian television channel, ran a news story [click the link below "Videók" to view the broadcast story] alleging that we had digitally manipulated the image of Mr Orbán before publication to materially alter his appearance. This is untrue. The uncropped picture, as purchased from the AFP news agency, is above, left. The image as it appeared in The Economist is to its right.

Earlier today we sent a letter to the editor-in-chief of Hír TV denying the allegation. The text is reproduced in full below.

Dear Sir,
I write to reject a completely unfounded and defamatory allegation you broadcast yesterday. Your report accused us of “manipulating” a photograph of the Hungarian prime minister, Viktor Orbán. This is not true, as our photo editor explained to your reporter yesterday before you ran the piece.

Your piece accepts that all publications edit photographs in some ways. Indeed, as in every magazine, all our pictures are colour-corrected for print production. We also cropped this picture to fit the column size: again, every magazine does this and nothing of any significance was left out. But the piece alleges that we went beyond this routine process to change the picture content fundamentally.

I attach the original wire picture from AFP and our cropped picture as it went to the printers. It is obvious that there is no manipulation.

Your piece reflected a dismal standard of reporting. Your journalist acknowledged to our photo editor that he had not actually compared the original with our cropped picture and he would not say how we were supposed to have manipulated the picture. After he rang off, he then failed to follow up this cursory interview, despite his assurances that he would be getting back to her. That was presumably because he would still have been unable to point to any signs of manipulation. It is true that our photo editor spoke to your reporter on an off-the-record basis. But your report failed to reflect her assurances that we had not manipulated the picture. And you never followed up to seek an official comment from us.

Nothing is more valuable to The Economist than our hard-earned reputation for objective and fair reporting. By impugning our actions, for what appears to be some political gain, you defame us and do your viewers a profound disservice.

To put that right, we have also published this letter on our website. Other media outlets in Hungary may want to pursue the objectivity of your reporting a little more thoroughly than you pursued ours.Yours sincerely

Episodes on the picturesque onward march of the Party of Vilified and Misunderstood Patriots.