Malaysia 10: A bazaar, heavy rain, a crash
and the death of Seamus Heaney 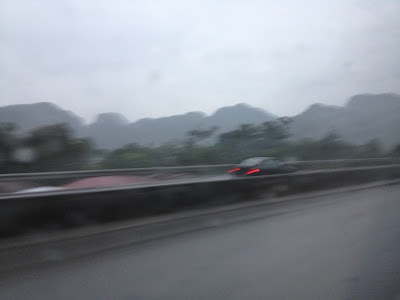 Day always begins later. No breakfast. We chat to Alvin in the lobby and meet Pauline at 12:00 who checks us out. We pack up the bus and drive to a food court where we eat a little then to a bazaar with a second-hand book stall  on the second floor where everyone buys books. We don't because of the weight. Under the piles of books our friends find early anthologies of poetry, a few novels, some with racy covers, and miscellaneous other things, mostly hard-cover ex-library stock. Among the books on the shelf are some that would not be seen in a regular bookshop such as Irshan Manji's The Trouble with Islam. After a while I sit down at the cafe on the same floor and drink some water. Here are a couple of notes:

An old man in white t-shirt and denim shorts in the cafe of the bazaar so thin he is barely there, his hair too thin, sits immobile at the metal table. He is so still I think he is meditating but when I look harder he seems to be taking his left pulse with his right hand. Then he takes his right pulse with his left hand. Each time a couple of minutes of absolute stillness. Then he folds his hands, palm upward as if to catch something from heaven. Judging from his expression he looks to be in despair but maybe that is just his way of keeping still. Maybe this is the heart of stillness, the capturing of it in moment after moment, capturing it with a purpose but little hope, like rain between dry spells or a moment of dryness between the rains.

Beggars too are models of stillness. This one has bent himself so out of shape he looks permanent. His knee is higher than his shoulder, one leg ends in a stump and is tucked under the other but somehow off the ground. He is like a puzzle that one or other god has tried to solve but gave up, walked off and forgot or left to another god to sort out. His gaze is fixed on the ground or maybe it is the ground that has mesmerised him so it is not within his willpower to raise his eyes. In any case it is stalemate: zugzwang. The stillness is itself forgotten. It is like those pointless pennies in his glass begging jar in which light is the only thing that moves. 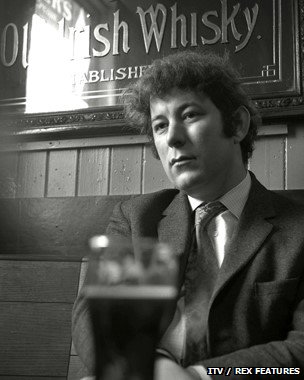 Then we set off to KL on the same highway we came on. Once again, as we approach the most spectacular part of the rout with its range of strange hills and mountains, the rain starts and soon it is almost monsoon-like, drenching and driving. Cars throw up spray. Traffic slows. There is a crash up ahead, a car upside drown and crushed. No sign of the driver or passengers. They are already gone. No blood either, but it mighthave been washed away in the rain.

Eddin has his mobile on and suddenly announces; Seamus Heaney has died! Shock. Alvin immediately goes on line. Semus had been ill for a while and had suffered a heart attack a couple of years back. Alvin finds a recording of him reading at Poetry Parnassus, a recording Alvin himself had made. We watch that and listen as well as we can. We talk about him for a while, then fall silent though eventually other conversation begins.

I won't begin to write an appreciation of his work here. I did meet Seamus a few times and had lunch with him in Dublin while I was International Writing Fellow there. He was charming, funny, generous and nicely mischievous, not a saint. I think he was careful not to be seen as a saint. The generosity sprang from his desire to say Yes to a great deal. I think he was deeply aware of his farming background and it kept him human and open to the non-literary. It is in fact what made him a great humane poet.

I don't think he had much influence on my own writing except in terms of technique, the sharp, sheerly sensuous and earthy. He was already established by the time I came to early maturity and his origins were so far from mine that, apart from the humane eye, there was little I could learn from him. My eyes, when it came to Irish poetry, were primarily on Derek Mahon. There was a man more like me in many respects.

But I had no doubt Seamus Heaney was as close to my idea of what a great poet might be as anyone could. He was beyond Irish while being fully so. That is why he, rightly, received the Nobel Prize. That is why he was loved in so many different places. People sometime poked fun at him as Famous Seamus. You could poke fun at his fame, not at him. There has not been a less pompous man.

Mahon once said this of Heaney:

"Heaney has a very sure sense of what he’s about. I haven’t that certainty. Each poem for me is a new beginning. With Seamus each poem is an accretion, an addition, a further step along a known road. [... H]e is performing a task the dimensions of which seem to be fairly clear. He knows what he is about is the best way I can put it. I only know what I’m about when I’ve done it.’"

I wonder do you agree?

It seems to me that Seamus did have some abiding sense of his position, his duty to dignify things (maybe manifest in him as a moral/ethical imperative?), but that this was not necessarily a hurdle to him shaking things up stylistically when he needed to... and he certainly seems not to have been tempted by those cultural forces that would have had him as 'their poet', and so he was all of ours, as you indicate.

In any case, I'm very sorry that he is no longer with us in person. It was quite strange how people over here were affected by his death. He was a big part of our upbringing without us even recognising it (a huge, if quietly modest, influence). There's something about his writing that just gets under the skin but yet is not conducive to being rammed down people's throats (and we all learned him in school where poetry is sometimes, or used to be, used a bit like a sort of language assault course!)

In the few converations I had with him, and in his writing generally, there is a sense of responsibility that is, as you say, modest and therefore without pretension. I think he was determined to be as ordinary as he could be, as he would have been had he not been such a prominent poet.

That Mahon quotation is very good. I think it reflects on Mahon's refined aesthetic sensibility and on the way he was, in many respects, an outsider, almost, as some said, a misanthrope. There is little sense of 'us' in Mahon. Granted Seamus avoided being of this or that party, he still addressed his readers as intimates.

I love Mahon's work because it seems such a struggle with the ways of the world. I think he is a kind of moral aesthete whose sensibility is in books and isolation, the solitary imagination. I feel I share a little of that. Heaney includes me in his intimacy - that is an essential part of his greatness - but his poetry isn't particularly addressed to me the way Mahon is.

"I love Mahon's work because it seems such a struggle with the ways of the world. I think he is a kind of moral aesthete whose sensibility is in books and isolation, the solitary imagination."

Yes, I think really embracing and embodying uncertainty and ambiguity positively/creatively is itself a very moral act in this world. I have to say that Mahon often appeals to me more too; maybe because we are both urbanites, and from the same edgy old city. Also, there is a roundedness and resolution, a polish, to Seamus that, while very attractive and consoling, does not resonate with that same element of 'struggle', which in life, and in the broader Irish context for sure, can get messy.

Mahon, as a northern Irish protestant, doesn't seem to have the same obsession as, say, Hewitt had with identity (MacNeice often seem to go off down creative avenues in reaction to his Irishness too). Mahon's concerns seem to be generally more immediate. I wonder if there is some element of that great historical and ideological Catholic/Protestant split operant between Heaney and Mahon: Heaney having one foot in the transcendent 'otherword', or having something of that tendency to oversee things in terms of a broad universality; and, in Mahon, the protestant immanence that saw 'the kingdom of God' as being potentially manifest right here in the nitty-gritty of daily life through good 'God's honest' work.

I like your choice of Seamus Heaney picture. Hadn't seen it before.