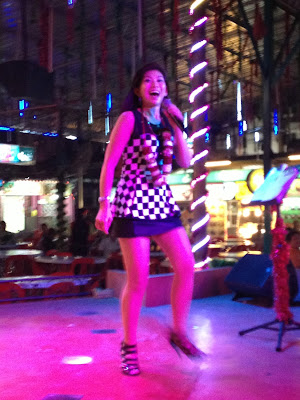 A long wet drive to Penang past fantastical cliffs like half sliced cake, sheer, ever more spectral in the growing dark. The rain pelts down and we wonder how long it will last. A stop at a large service station where the washrooms are a supermarket-sized building to themselves. There is a market where we buy some mangousteens before proceeding in the rain, Karl driving.

After about five hours or so we reach Penang, crossing the long bridge from the mainland, moving past modern tenement blocks and industrial / office complexes and into the centre to our hotel. Having checked in we go straight out for dinner.

The place is very big eaterie with a stage where a girl is singing to a karaoke machine. She has a rather good voice and we move past to a table behind her and eat there, but once done eating we take up a chair right in front of the stage and see a succession of singers, one man in a domino-checked jacket and three girls, two of them in dark and domino checks, the third informal in short pants. They are performing a series of mostly seventies hits from various parts of SE Asia including Japan and Thailand in a range of languages. We grow more enthusiastic over beers and encourage them. The singers can earn a sash or garland, members of the audience paying for them with a few bills. We do that too. It isn't expensive. Karl gets up to dance before the stage. The girl responds. She comes over to our table and talks to Karl. One of the other girls does too, and then the young man. They all have good voices. One girl, in black, is a little shyer but she picks up confidence as they take turns. At a table next door they buy us more beer. I am not in the least drunk but watch. Alvin, Pauline and Eddin all join in with Karl and soon Clarissa and I are hand jiving and waving arms.

Our hosts and Alvin are in their element. Alvin interprets some song lyrics for us. Eddin pays, Karl  and Pamela dance, Pamela straight, Karl with a touch of dramatic irony.  At the end the man at the keyboard sings a couple of tracks. Alvin points out how democratic this all is, no extra charge, songs from everywhere, all familiar from their childhoods, popular hits, disco hits. It is clearly great joy for them, familiar, celebratory, nostalgic, liberating.

We hit a nearby eaterie for tea. More singing. Eddin was a child crooner and sings well now. Alvin does Barry Gibb. Pauline moves beautifully. The tunes are mostly unknown to Clarissa and I and I am aware of being from outside this sphere, not to mention, much older. The company is mostly the age of our children, maybe a little older. If we were by ourselves C and I would probably get up and dance. The talk moves on to dancers and ladyboys who are fully accepted here from an early age. Androgyny and hermaphrodism are no problem except for the strictly religious. They tell of one particular dancer who was very effeminate but moved his Paris audience to tears, who was supposed to turn into a wild boar in the bathroom. When he danced the theatre cat took up position on a chair and wouldn't move for three weeks. The previous night we had talked long of ghosts and demons and succubi. All very real here.

But this is the real Malaysia, they say. 'This is what we are fighting for.' That's not entirely comedy either.

At the next table a streetwalker sits down. She has a low cut dress showing a lot of cleavage. One man seems to be making a deal with her, but she doesn't go with him. Later two more streetwalkers join her. But is it a woman, or a ladyboy? I think she is a woman, Clarissa thinks otherwise.

Then back to the hotel. Today (we are seven hours ahead of the UK) we will walk around. The rain has stopped. It's morning, half-past eight. The sky is grey but we are by the sea, a clear tranquil sheen of silver hardly different from the sky.

Hard to gauge the state of one's soul. Pleased, flattered, dazzled yet quite calm. Here is a missing part of experience, like an enormous wedge. Let it enter. Nothing human is alien, we say, and it is true. Fun is fun, dance is dance, the soul is the soul, as various as life itself. It is something to be deemed worthy of such generosity and deep entertainment, though all this lack of sleep will catch up on me sometime.

I am an introspective sort of creature who has learned to be social. I have become quite good at it, I think, but it's the way a man might learn to monocycle. At night I put the monocycle away and tiptoe round my head like a ghost. God knows what landscapes are forming there. We shall find out.