Malaysia 9:
The I incident

Yesterday (today being Friday 30 August) we went to the Khoo Kongsi..


... one of the most distinctive Chinese clan association in Malaysia. It is well known worldwide for its extensive lineage that can be traced back 650 years ago, as well as its closely-knit and defensive congregation of buildings and a magnificent clanhouse.

As the website tells and shows it is a large maze-like block of several buildings with only three entrances, and, at the centre, a  traditional Chinese theatre and, opposite it, an even more magnificent temple-cum-gathering place, the Leong San Tong. The website tells you far more than I know so there is no point in trying to summarise it. As with all these blogs my aim is to give a subjective impression and to comment when appropriate rather than write a tourist guide.

Eddin, our host, is himself of the Khoo family so it is a place of some importance to him. Not that he has any particular rights to it. There are a great many generations of the Khoo clan that are represented in that 'congregation of buildings' and in the list of names.

While there Eddin receives a call that says that one of his cousins, the artist Anurendera Jegadeva is being investigated by the police for one of his paintings in an exhibition, because someone has made a complaint. Here is one report of the story, here's another. Here is the picture one of a set of works based on letters of the alphabet. 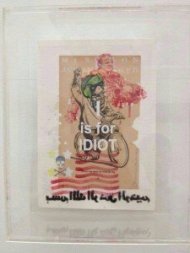 To my eye - granted the reproduction is small - it shows an American flag rather than the Malaysian one, with four stars in the corner, an ape on a bicycle and a figure with the words of George W Bush on it "mission accomplished". The ape on the bike is a little enigmatic but the rest seems plain enough, it being a simple satire on Bush, presumably the Idiot, and the Iraq War. The part that upset the more fervent Islamists, however, is the text, which is, as the Mail / Yahoo article tells us:


..a mirrored inscription of the Arabic word "basmala" that is part of the Islamic phrase commonly translated as "In the name of God, the Most Gracious, the Most Merciful"

Because it is mirrored it is taken to be an insult to Islam and that then completely changes the meaning of the picture so that the flag is the Malaysian flag, and the I is not for Idiot but for Islam. Thereafter the minute iconographers of insult get to work on it, and produce a catalogue of interpretations that would lead to charges and a possible prison sentence.

The police do not hesitate. They confiscate the picture and close the show, intended to open on National Day tomorrow. The whole affair is under investigation while a number of Ismalicist blogs are howling for the artist's blood.

No one imagines an insult to Christianity or Hinduism or Taoism or Buddhism would have the same effect. What makes the accusation worse is that in the critical UMNO blogs the artist is described as an Indian Hindu, in other words not a 'proper' Malay.

There is a good deal of this religious bullying going on in Malaysia. Seeking out insults, arousing indignation and pushing for prosecutions is not unusual. This case seems particularly noxious because of, what appears to me and presumably many other people, a wilful misinterpretation of a work whose meaning seems as clear as day. One of a series of works it is a passing remark on US policy under Bush and the inscription is read in the light of the image. The trick of the acusation is to reverse the relationship, to take the mirroring of the text as an insult and then transfer that insult to everything else.

This news will probably not make it to the western media but if it does it will be noted and people will shrug in that slightly fearful way, dismissing the incident as minor while inwardly thinking: For God's sake let's not interfere in case it goes down as a bad mark against us and endangers our people.

Having heard this news Eddin is busily ringing round trying to organise a petition. Later Pauline has bad news of her mother in Bangkok. She has broken her knee and there are complications. She will have to fly and look after her  at her apartment as there isn't anyone else. This means Kelantan and the shadowplay is off. A change of plans.

This is the seventh month of the Chinese calendar, what the Chinese know as Hungry Ghost month, and even among the most sophisticated there remains a certain wariness, as there is of ghosts generally, of doing the wrong things.

After the Khoo Kongsi we sit down for ice cream and cooling drinks by a Chinese temple area. Drums begin to beat. They are enacting the feeding of the devil to keep him occupied. Apparently they feed him cocaine. There is no special dress for the occasion.

After a lie down we go to the Gurney Food Court a large open space full tables and stools surrounded by a lot of food stalls selling individual dishes. Crowds of local people eat there. We sit in the open and eat till about midnight. The sea is just a few yards away.

The streets are a patchwork of architectural styles, from the rudimentary to the highly ornate. The colonial building are pure, peremptory, clean lined, a little grand. The temples are diverse, overflowing with form, colour and narrative. Life winds around them. It is the nature of the place to be patchwork, to select from a vast and complex pattern of ways of eating and being.

H George, I guess it's another brick in the wall. Indeed it's a bit like the current Roger Waters (Pink Floyd) 'The Wall' Tour now in Germany. It was in Vienna. It's his pig balloon covered in emblems (oil, money, war and so on) one of which is the Israel star (presumably illegal settlements) that is causing all the fuss and the call for a concert boycott. I think the normal condition of man is a kind of madness. Fortunately Cameron has been defeated in parliament his bid to emulate the desert warrior Blair.

Marvellous blog George, thank you, I am so enjoying reading these. My personal fave bit today: 'Thereafter the minute iconographers of insult get to work on it...' - brilliant, if a little soul destroying :)