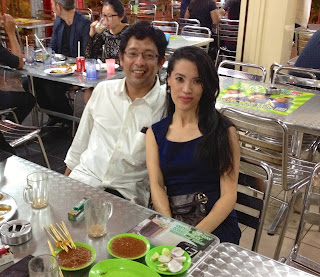 
Up till 3:30am last night and feeling fresh, but that is  because it was only 8pm UK time. Consequently we don't wake till 11:30 this morning. It is lightly cloudy and will reach about 33C later with some rain. The view from the eleventh floor is much like it was yesterday afternoon, the traffic gently and quietly creeping past on the four-lane carriageways and flyovers below, but just some twenty minutes ago the sight of two storks working their way across the sky. It is many year since I have seen storks.

Yesterday evening we were just by the Indian quarter, full of small Hindu temples and a market. We started in a restaurant opposite, meeting two young friends of P and E, Iqe and Karl (I don't know that I have spelled either of those correctly) both lawyers, one qualified the other about to be. We have a quick light meal, talking throughout, then we move to a restaurant / bar owned by E's friend Ed, which is where our Sunday event is to be. After that we sit down upstairs by the window together with Ed. More talk of politics and film and books. Then we move on to a bar / cafe for a light bite and some sweet tea. Talk doesn't fail, we joke, tease each other a little. We hear about the ins and outs of Malaysian politics, about the role of rhetoric - people addressing stadiums full of supporters. I talk about the function and power of rhetoric in British politics. I doubt whether any British politican woulf even think of trying to fill a stadium. Politics is, generally, articulate, but its effects are restricted to sound-bites. Talk too of political charisma and what that means. I have a faint suspicion of the great charismatic leader, or charisma in general. Dull administrations seem less egotistical and paranoid. Sometimes more radical. No one ever accused Clem Attlee of being charismatic (the old Churchill joke about an empty taxi arriving at no 10 and Attlee getting out). Churchill was witty, but the Attlee government was the most revolutionary British government of the 20C, until Mrs Thatcher who may have been spell-binding in some ways but not exactly charismatic either.

Soon going downstairs for lunch, then in the evening to see Becky, a good friend of daughter Helen.

So, lunch with P and E. They have so much planning to do. Now back in hotel for about half an hour. Learning a great deal about how Malaysia patronage works, more about the rise of fundamentalist Islam which, seems at moments, to parallel the rise of puritanism in many other places. Last Ramadan sermon was on 'the enemies of Islam' - not so much political as ideological, enemies such as liberalism, socialism, feminism, etc. The same aquarium light. More later.

No rain. About 4:40pm we ask for a taxi to take us to B's place. The taxi arrives and using a mobile phone satnav he gets us there. He is a sweet man. When it comes to payment it is a small fee but I only have large denomination that he cannot change. I do have one small note that falls short of the fare by about 40%. He smiles, says don't worry, takes the note and drives off.

B is an old close schoolfriend of our daughter. Her husband is away in Poland, she has a 15 month old son. The building is in a very expensive part of the city, the apartment, up fifteen floors, is paid by his company, the company she too worked for until the baby arrived. The flat is enormous - like a small town, I say - immaculate, modern, up to date in every respect with magnificent views. It feels vaguely unreal and the great glass windows with the views - there is also a balcony - add to the sense of illusion. It is almost film set. Top of Gotham City without the gothic. (I'll put up a photo of the view at dusk soon.)

Poor construction though, she says. Since they've been there over twenty windows have smashed or fallen out. The fabric is not what you'd expect. Corruption, she suggests. We go out for a drink. The security is considerable, all charming Nepalese. B knows them all, they all greet the baby. There is clear mutual fondness.

At the bar she talks about what she doesn't like: the way the state treats people at the bottom of the heap. The way the Malays occupy every position of influence. We are sitting outside. The bar is expensive with a small pool and cascade, the staff very friendly. We are sipping wine, in my case, beer.

B is very impressive, ex-Oxford psychology, years abroad with the big company. The mistreatment of poor minorities rankles with her. So does the crime. She has been shaken down by a policeman looking for easy money. Cops are badly paid. She dislikes both injustice and incompetence.

We drop into the nearby supermarket, which is like a dream of Harrods, to buy some potatoes. The staff greet her. One of them offers me a copy of a glossy mag, The Expat. Then we go back to the dream flat and she gives baby a bath. I tinkle the baby grand piano, then we sit out to eat on the balcony, which is cool and offers spectacular spectacular. Very good talking to B. An outsider's view (though they have been there almost three years). Will she go back to work? She is learning Mandarin. She wants a second child. And then? That is too far ahead.

Taxi back is more expensive, the meter starting at twice the fare the last had started at. It's still cheap. As soon as we arrive, there are Pauline and Eddin with the Indonesian poet Goenewan Mohamad and our good friend Alvin Pang, the two poets with whom I am to read on Sunday, as well as Ken, an old friend of Pauline's who has come to help. Coming for a drink, they say? And food, they add. We have just had a full meal at B's.

But we go, sit round a big table and we manage to nibble something. Talk is difficult to hear but in the middle of the meal a phone message for E. Great news. Bank support for the next five years.