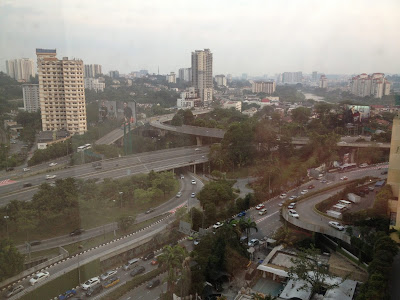 We set the alarm for 04:00 and made the 05:45 from Wymondham to Heathrow 4, leaving our friends in charge of the house. Two trolleys and light hand luggage, with books to give as presents and many books on the Kindles for reading. A very quiet walk down to the station and, at first, a bare platform then just before the train a slow gathering of early travellers.

We arrive at Heathrow about 09:20, then the long wait. Security double checks my Kindle, then we sit, read and wait. Once on, the flight at 12:00 GMT arrives in KL at 19:40 local time, a flight of a little over 12 hours. It's a packed flight. The boy next to us was born in Trinidad, father a helicopter pilot currently stationed in Malaysia. Bright eyed boy, wants to be an aeronautical engineer, has flown planes, is about 17 maybe.

I watch four and a half movies - reading when tired isn't easy. The Negotiator is very good. Batman Returns (I had never seen it through) is a nice Tim Burton fantasy with Michele Pfeiffer as Catwoman. There is a kind of psychological exploration here but it doesn't go deep. I rather got to like the Penguin by the end. Tough life for a mutant. To stick with mutants I also watch X-Men which sets out as a potentially interesting take on post-Holocaust notions of dangerously gifted mutants, mutants being essentially Jewish untermensch, but quickly moves into zap-the-villain-mode. Start watching Sherlock Holmes, the Guy Ritchie version, but even as semi-dozy hallucination it works more as annoyance than pleasure. Watch Bad Company through. Heaven knows why, possibly because it is close to landing. Chris Rock is in sub-Jim Carrey gurning mode, part cool, sickly sweetness part full eye-stretching panic model. Deeply stupid stuff.

I will only note that in three of these films men are shown apologising to women, two of them with almost exactly the same text. 'I'm sorry, I messed up...'  What are they apologising for? One for getting wrongly accused and shot, the other for being, well, a young man.

Keep apologising guys. It'll put you on the side of the angels, which is where you need to be most of the time.

Arriving in KL it is warm and a little muggy, but far from uncomfortable. Pauline and Eddin meet us and drive us about an hour's distance to central KL, stopping for refreshments (breakfast for P and E, a coffee and an orange juice in my case), on the way. We talk all the time, about Malaysian politics, literature, poetry, novels, the exoticisation of Malaysian experience in books, and about ourselves. P and E work on several fronts. We feel immediately at home with them both, intelligent, beautiful and deeply read people involved in translation, publishing, editing, writing, journalism and more. We talk a little about post-colonial history, about the stages of its development and what effects that has on writing. We talk about the Malay language, its history, literature and future. About the Islamicisation of the country, about how the young are often angrier about what never happened to them than are those who were part of history. 'Few of us have been historical actors, even in a passive sense,' I say.

I go on thinking how those only a little younger than us have watched history happen but rarely as it affected them. Even though Clarissa and I are products of violent historical moments, we too have seen terrors and dramas mostly at a remove. Those a generation down from us will have seen history as ever more a series of semi-virtual moments that disappear almost as soon as they are over. Think Baudrillard. Baudrillard is a dreadful show-off in some ways but he does grasp something valuable. Who remembers the Cold War now? Did it really happen? Did World War 2? Did the first Iraq War? It is as if we were standing on clouds composed of movies clips and nightmares.

Tonight we eat out with Pauline and Eddin and meet some of their friends. It is a privilege being alive, as we often forget, and this is one of those privileges.

Lovely, George--informative, entertaining and thoughtful as usual. And having been introduced to the poetry of Peter Sirr by Penny Shuttle when I was away with second Light, I'm delighted to see him on your list. Hope Malaysia continues to be a delight.

Thank you, Denni. Life will continue interesting, surprising and enlightening.