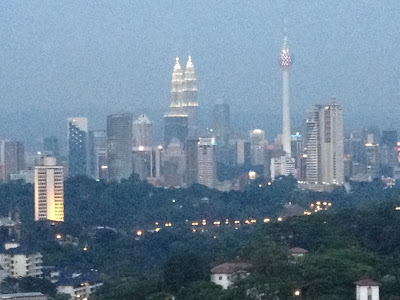 A daily paper The Star is left at our door each morning. E used to write for it some years back. Yesterday's front page splash was a tragic bus crash in which, according to some, the driver got into road rage with another vehicle and drove straight into the valley at high speed killing many of the passengers. It is still the headline news today with photographs of the wrecked bus both on the front page and inside, with now some dispute about the condition of the driver, who had been working for the line just two months and had received no complaints about his speeding. His son declares in one headline 'My dad wasn't an angry man', the word 'angry' in red, an interesting feature of the paper  where many of the headlines have a key word or phrase in red. Driving and safety seem to be an issue here.

In another headline Thieves loot 180-year-old temple in Penang. Penang is where we are due in a few days time.  Yet another headline - interesting for an Islamic state - Sex bloggers file application. A man and woman apparently run a sex blog for swingers, and producing an inappropriate Ramadan greeting on Facebook, or at least that is how I understand it. They are appealing to have one of the charges dropped.

Most interestingly, in view of the rise of Islamic power and the Ramadan speech about 'the enemies of Islam' there is an article titled Need we be so sensitive (I'd link to it if I could find a link), in which the writer reflects on the incident of a surau in Sedili Besar, which a Buddhist group had booked. This was looked upon as an offence to Muslims (the great majority in the country), who have demanded the building be demolished now. The author pleads for some charity and laments the tendency of the Muslims to see offence everywhere. By way of counter example he quotes the experience of his son in an Anglican boarding school where the school immediately granted him 'a spiritual space' and heard him recite the Takbir when the school parents were in, applauding him afterwards. He says that Islam isn't a small religion to be wiped out with the stroke of a pen and asks that Muslims be loving and merciful. The author is a female social activist who wants to promote a progressive and inclusive Islam. It will be interesting to see the reactions to her piece. A pity I can't link to it: much else in the paper can be linked.

The ancient technique of breeding paranoia and suspicion and seeing offence everywhere works in most circumstances. It is particularly successful in puritanical periods and in authoritarian states. The message is:

Everyone is against us, we must use harsh methods so your freedoms will, as you will understand, be necessarily curtailed. Just look how [the enemy] despise and want to destroy you. Let us show you their atrocities. Some of the atrocities may look small but they protend greater evils. As for those enemies, they are powerful and barely human. Do not trust them an inch and, at the slightest provocation, step on them like noxious insects and crush them.

This is not specifically Islamic teaching (like all religions Islam is complex and has many strands), it is, as we would now say, the discourse of power and, like Lily the Pink's medicinal compound, 'has appilicaitons' in every case. In our time it is the expanding discourse of some forms of puritanical Islam.

But then you get back to the pornographers with their Ramadan greeting and you see how life is complicated, contrary and not a little mad, as we were told it might be.