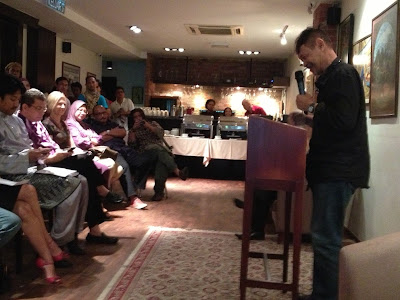 Goeawan Mohamad reading at the launch of Obscura


Impossible to say anything in detail about a place you are seeing for the first time. There are only impressions and conversations, plus a little reading.

Yesterday morning, as all mornings so far, I spent writing this blog, then we met for lunch elsewhere opposite Eddin's favourite movie shop where you can pretty well get any movie you like. We ate bountifully and talked then moved on to the Opus restaurant for the event - the launch of Obscura, a new twice-yearly journal for literature and translation, and the readings by Indonesian poet Goenawan Mohamad, Alvin Pang from Singapore and myself as guests, as well as passages from the Iliad, Byron, and The Waste Land in Malay. Part of Eddin and Pauline's project is to introduce as much of world literature as possible to the Malay language so as to enrich it and prepare it to be a vibrant and comprehensive part of world literature. Pauline and Eddin pursue these great projects with tremendous intelligence, energy, generosity and skill. There are competing versions of Malaysia, and theirs is a vision that has major cultural and political repercussions.

The readings themselves were in the upstairs room of the restaurant laid on by Ed the restaurant's owner. We started a little late but soon the place was packed. Eddin did the introductions, the poets spoke and read, their work translated into English or Malay, or even German as the case may be (the head of the Malaysian Goethe Institute was present). The guest poets read three poems each, with translations, my own translated by Pauline. It was my first chance to hear Goenawan, whose poems have appeared in English editions but are currently difficult to find. Eddin says he is one of the great poets not only of the region but of the world at large. There will certainly be more of Goenawan in English by next year, possibly through NYRB, but we will wait till then.

I already know Alvin's poetry - its energy, inventiveness and humanity. He recited two of the poems and read the third with a translation by Eddin. Alvin is ubiquitous. We first met in Norwich, then in St Andrews, then in London, and now here, where we shall meet again next year.

Afterwards we adjourn first to a bar, then to restaurant, and talk.

Talk is always interesting. I am always asking questions, looking to understand the situation and occasionally to respond with parallels in UK or Hungary. The political and social context slowly begins to open out. From yesterday's conversations the following picture emerges:

Malaysia's prime divisions are among racial lines: Malays, Chinese and Indians, and a number of mixed races. Race is the term used in the conversation. The Malays constitute the largest and most powerful group with most of the privileges since they consider themselves deprived. Because they consider themselves deprived they garner ever more privileges. The people's loyalties too are divided along racial lines though there are many complications.

Religion is one of them. As often remarked there are many strands of Islam but the hard line Wahhabi version is the one that is gaining ground fast. It is the group that is easiest to offend, that most desires to restrict cultural and religious forms, and which is already banning the Wayang Kulit plays in certain regions because it finds them un-Islamic. This strain of Islamism is associated with the Malays but they are not quite the same thing. Islamism is a force of its own as is Malay nationalism.

Political corruption is common: there is the fixing of voting registers, the miscounting of votes, the usual run of under the counter deals and pressures. The same party has been in power since independence, though currently the opposition is running it close. Demonstrations and activism are natural reactions to gerrymandering.

There are also the gangs, the various Triads, of the different racial groups. These are often on good terms with the police, though currently there is a clean-up operation going on. Protection rackets are common.

But under it all the racial tension. In one university a lecturer declares: if you see a snake and an Indian at your feet stamp on the Indian first.

Parts of the world have been moving in this dangerous direction for some while now.

Today, the well witnessed vibrancy of the KL street. In ten minutes time we are off to explore it, with Alvin.

What a privilege to be here, to learn something new. And, beyond the political scene to enjoy life. So grateful for the invitiation.