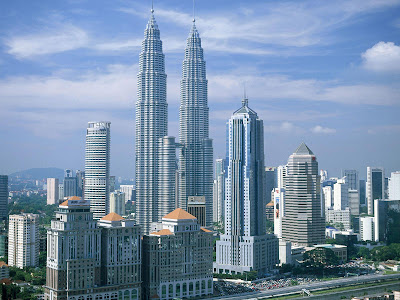 Yesterday from about 11 onwards we went walking with Alvin around KL in the environs of the twin towers, down past Chinese areas and Malay areas, from the relatively - but only relatively - poor and traditional and the wealthier newer shopping areas.

If much of British social life is centred on drink, the pubs where people gather to talk and relax, then much of Malaysian life is based on food. The streets are full of open fronted, walk-in eating places with cheap plastic chairs and tables, whirring fans, quick service and, generally, good food. Nothing smooth or flash in presentation, these are however frequented by every class of patron except the poorest. People eat several times a day, not necessarily a full meal, but a series of snacks. The eatieries - I am not sure whether to call them restaurants - can simply be places to drop in off the hot street to order iced drinks of various kinds, the tall glasses packed with ice, or you might get  a pot of hot tea along with a glass full of ice. The food varies from Chinese to Indian to Malay to Middle Eastern but you can find shepherd's pie in some places, and straight burgers. Rice and noodles are staples and the dishes are often derived from the food available on trading ships, such as nasi goreng, which is rice and egg plus meat and veg and anything else you can find.

Our friends have a series of favourite such places specialising in one or the other style of food. The crab place two nights ago was very much Chinese; last night we went to an Arabian 'tent' restaurant. During the day we dropped in at a Chinese eaterie for what was a lunch peck for us and breakfast for Alvin. We were crowded round tables, needed plenty of liquid.

All along the street are massage parlours that might be for normal massage during the day but are for prostitution in the evening. Even during the day though you see girls sitting outside, dressed for the part, highly made up, ready to be picked up. Some smile and invite you in. They come from various backgrounds and often look to work four or five years and make enough money to start a business. They are not social outcasts and are looked after, as are the restaurants, by the various triads who regulate a lot of the trade. There is, they say, no toleration of paedophilia and work is relatively safe, no drugs and not much chance of violence. The clients are local but also tourists who tend to come from whichever part of the world is relatively wealthy at the time. Currently they are from the Gulf.

The Gulf also buys into the restaurant trade and you can see that in the look of the places themselves. They are smarter and aimed at richer visitors. The older Arabic places are like all the others, the new come with more display, more ostentatious comfort, more decorative hookahs, more kitsch.

Cross one street though and you are in newer middle class KL, where the big brand shops operate as they do in all major cities, including the most expensive. You can stop for a cocktail here that costs much the same as it might in the UK.

We cross the bridges in the air and arrive at the Atrium Hyatt where we take a lift to the lobby which is, in this case,  at the top of the building that offers great close up views of the Petrona Towers (above). In other respects the Hyatt is exactly like every other luxury hotel. We take high tea in the floor below the lobby and talk. The talk is of the balance between realpolitik and ideology, of empires and spheres of influence, of the economic rise and fall of states. High tea consists of as much coffee as you want, some finger sandwiches and a selection of cakes on a rack. All very nice, all very luxury. We take photos.

When we go down the gardens and fountains below are quite crowded. Many women in chadors, some in burqa, some in hijab, more than a few years ago, but also many in western dress. It is hot outside. We walk round the corner to face the Petrona Towers (Clarissa later compares them to ribbed condoms) and go in to visit the Kinokuniya bookshop. It is enormous, on two floors, books in English and Malay. Tempted by too many we go to the Coffee Club and drink iced tea. Alvin, who has been browsing, joins us. We talk about families, the idea of the close-knit family with its mutual responsibilities and obligations, we talk about high stress societies, about breakdown, depression, birthrates, health, the NHS, the social stigma of joblessness, the travelling to work, the pressures of school and performance.

Apart from being a poet Alvin is editor-in-chief of a policy magazine (the rough equivalent of the Harvard Business Review)  in Singapore. He has worked in government, writing speeches, interviewing politicians and public servants. His range of knowledge and ready fluency on almost everything is deeply impressive. He wears a number of hats beside editor and poet. He doesn't come from a prominent or wealthy family. His father was a schoolteacher and the family has gone through cycles from relative comfort to fairly minimal comfort. He is the first generation in the professional and intellectual elite. He tends to view things astutely with a pragmatic eye but a very good heart. He knows the progressive, liberal or socialist views of an educated minority are always subject to powers of army and state. Primarily he is a poet.

We wait for Pauline and Eddin, spend a little more time browsing. I am easily persuaded to buy José Rizal's Noli Me Tangere. Sometimes - quite often in fact -I feel shamefully ignorant but I have asked for a list of recommended books that Pauline has promised to send me.

Then we head off to the Arabian restaurant where we talk over the sexual morés of the region, of the idea of coming out as gay, of adolescent marriage, then move to the effects of the Vietnam War on the region about which Eddin is writing a book, as also about the internal struggles of Islam. Eddin starts off tired but grows more animated and wide awake as the conversation goes on. At night the district becomes a red light area, but no doubt many parts of KL serves a similar purpose after dark. The streets are actually safer after dark, says Alvin, because the triads exercise control with co-operation from the police. You are more likely to meet a snatch thief in the day.

In about half an hour we are driving to Malacca.

This is an interesting literary travelogue George, thank you. I read it with a slight worry--that the work that Pauline and Eddin is becoming more important by the day, to preserve and encourage a tolerant and cosmopolitan Malaysian culture in the light of the increasing influence of the Wahabi brand of suspicious Islam. It's important work and I'm pleased to hear of it.

I believe they themselves think it is a race against time. I suppose I think it too but I don't live here and see it happening. My own sense of political purpose involves the Eastern European region primarily because I know something about it.

And maybe that is one of the reasons Eddin and Pauline have invited me here, beside the poetry. Our ideas are similar in many ways, the same kinds of things conern us. They are enormously impressive people who think for themselves based on a wide civilised reading and direct personal experience.

The trouble with us and our feeling for the importance of the individual prerogative is that we have to find each other individually too. We are not a cohesive unit, unlike the forces of religion or nationalism.

But I am really only learning, and am a relatively naive newcomer on this terrain.