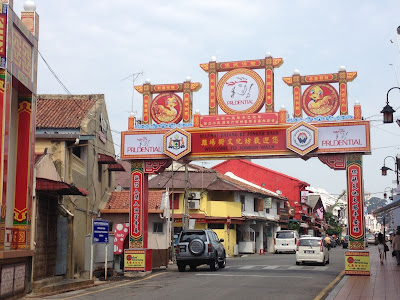 It's about an hour and a half from KL to Malacca. The old heritage city is the destination. Eddin couldn't come so Karl drove us in a hired eight-seater. I had had a very bad night of some two or three hours sleep so wondered if I would stay awake, but I did so, talking away to Alvin in the back seat while Clarissa talked to Pauline ahead and, at the front, Karl drove on with Iqe beside him. The music was old Weimar jazz, the roads pretty well three-lane carriage all the way.

Alvin and I talked poetry, the nature of it, ways of talking about it. He raised the interesting idea of the computer programme as a kind of poem, the actual text produced being simply a reading of it. I talk of the inherent idea of poetry in humanity at large, the instictive understandimg of what it is, what it is for, and the way education confuses people. He told how one of his poems was being discussed at an educational event and the students were all rather reticent. They were being asked about the 'meaning' of the poem, as though there were a simple answer to it. But when he encouraged them simply to explore what came into their heads as they read the confidence immediately returned.

What to say of Malacca? The old part of town is a heritage site and looks much as it might have before the eighties and nineties, a little more as Clarissa remembers Malaysia. Low buildings, shopping units of equal size, some open, some with doors, a mixture of Portuguese, Dutch and British and various local styles, as well as Islamic and Buddhist temples and Christian churches. There are places to let, empty places, that would be expensive to buy now. Rich colour. One place obsessed with cats and literature has cat figures plastered all over the front. Being a heritage site doesn't mean cramping your style in terms of decoration. Plenty of safes and eateries. A junk and antiques shop selling standard second-hand books of Eng Lit but also Penguin classics: Sartre, Gogol, Lawrence...

First (of course) lunch with our Homer translator, scholar and local parliamentary candidate. He talks of Mao and Stalin and compares them with figures from Malaysian history and myth. I ask him what it was like to stand as candidate. A lot of public meetings he said. It wasn't so much a case of attacking the rival candidate as putting your case, not so much on local as on national issues. Opposite me a TV screen plays advertisements. 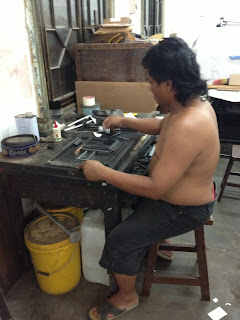 Then we walk around the streets and visit the Royal printers. This is nostalgic for us as Clarissa and I ran a monotype press for some eight years in Hertfordshire. Here are the presses, the linotype machines, the platen presses, the type cabinets, the trays, the quads and ems and ens. The press used to produce calendars, bus tickets, death certificates. It still does a little printing but is in the process of being turned into a printing museum. We talk with the young man and woman who show us around. They are very sweet. They show us the paper. A man, naked to the waist, is cutting paper to size. An old woman compositor is at work in another room. The works are not in a special building but in what was a family house, with two courtyards, both covered. The whole place is beautifully in-between, a slowly fading workplace becoming a museum in construction. The light slants through the courtyards and the big open place that was the chimney.

After a little more walking (and a little more eating and drinking) we ride up to the old fort overlooking the Straits. There is a museum of democracy there with a black car in front of it but no-one going in or out. Further up what was the old church of St Franci Xavier, that then became St Paul's for the Dutch, then a fort, then a British ammunition store, and is now a fine look-out point over the Straits. It is a shell with memorial tablets leaning against the wall, the tablets in Dutch and Latin and English, the latter to a four year old daughter. Small slender cats wind about the corners, or sun themselves outside. Outside a man is drawing the view, then stops and performs what might be a form of Tai Chi, his hands and arms moving gracefully, palms now up to the sky then against his chest, as if drawing the light into him. He looks Indian, is quite stout and is fully absorbed in his actions.

Then more food back in old Malacca. We have upstairs to ourselves. There are several screens. Music is playing, a selection from old standards, while the silent screens show the resident band in performance, mouthing. The food is, as ever, good.

Then we move again, drive home, and stop for drinks and more food. Arrive back about half an hour after midnight.

Once home I will put up a selection of photographs. Not much time to edit now.

I went with my wife to Malacca and Singapore in February. Malacca was as you describe it, George, but dominated by the festivities of the Chinese New Year. The Chinese temples were a hive of activity, and the hotels were full of people banqueting. The Chinese-owned, though, shops were all shut. The old church you describe was a hive of commerce, artists selling pictures to tourists and other stallholders flogging trinkets. I thought the Malaysians were an enterprising nation!

Our next trip on Sunday is to Budapest and Prague. I am getting into the spirit of things by leafing through The Budapest File and Reel!

First time to Budapest or Prague, Dennis? I hope you have a great time. Some wonderful buildings and areas in both.

No particular festivities in Malaysia yet though it will be National Day on 31st.

My first time both in Budapest and in Prague. Thanks for your good wishes.